By Campus Times Editorial Board, Danielle De Luna on April 12, 2019 in Editorials, Opinions 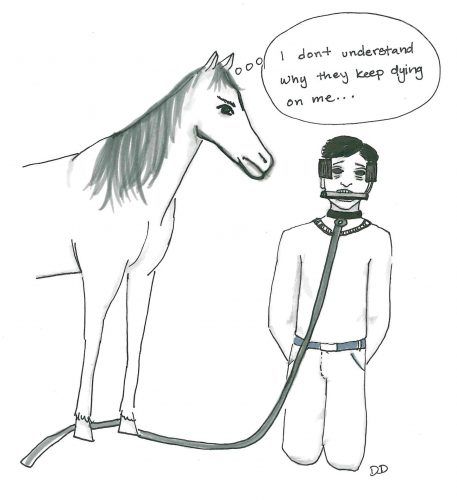 Over the last three months 23 race horses have died at Santa Anita Park, a Thoroughbred racetrack in Arcadia. This prompted Sen. Dianne Feinstein, D-California, to close the track until further investigations have been completed. These recent deaths have served to expose horse racing for what it is: a brutal, cruel and inhumane sport, that has long outlived its former caché.

With famous horses like Seabiscuit having raced at the track, Santa Anita holds a special place in the heart of horse racers. But many people ignore or are unaware of the harsh conditions that these animals are subjected to.

The sport of horse racing which has existed for 150 years, has disregarded and neglected to care for these animals, and instead has forced them to race under unsafe conditions.

Because horse racing has become such a commodity in the last decade with countless races and tracks across the country, this means over 6,000 horses have died in the last 10 years as a result of racing.

Those in the horse racing industry are quick to say how much horses naturally love to run, but are equally quick to whip the horses to go faster. Additionally, the horses are constantly given pain killers to dull the pain. Not that the athletes could protest.

You may be asking yourself: Why do horses love to run if it hurts them? The answer is the tracks. Traditional tracks use dirt, which provides the most consistent results but is also physically the hardest to run on. While European horse racing favors using turf, the United States still is partial to dirt. Horses are such powerful creatures that are very muscular, but are supported by such comparatively slender legs. This means that often times the horses legs are the first to get injured, and a horse with broken legs is not going to win any races and has no use to its owners.

Other alternatives to dirt have been used on tracks like Santa Anita, which uses synthetic petroleum material. However, the constantly fluctuating weather in California leads to drastically different track conditions throughout the day, where the track is cold and firm in the morning, but becomes softer as the temperature rises throughout the day.

Many also theorize that because horses are specifically bred for speed (not durability) the horses are almost set up for long term failure as their bodies are not able to take the strain on the tracks. In response to the growing debate, Santa Anita announced an initiative that would regulate the use of different medications and would ban the use of whips in races.

While these recent fixes could be called “a step in the right direction” the real fix is to abolish this inhumane and deadly sport, before more innocent horses are killed.