By Ariel Torres, Nicolette Rojo on April 19, 2019 in Softball, Sports 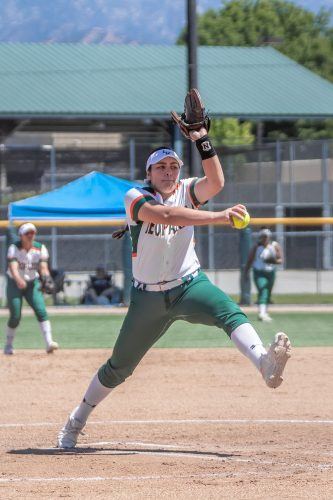 Sophomore Jiana Rojo pitches against Claremont-Mudd-Scripps in game one Saturday. The Leopards lost both games of the doubleheader against the Athenas, 5-1 and 7-5. / photo by Ariel Torres

The softball team powered through Occidental on Friday at Campus West, sweeping the doubleheader 5-0 in game one and 15-3 in game two.

However, the Leopards were tripped up by No. 5 Claremont-Mudd-Scripps in Saturday’s doubleheader, losing both games, 5-1 and 7-3.

The Leopards entered the weekend in fourth place with a 13-17 overall record and 9-9 in Southern California Intercollegiate Athletic Conference play.

Sophomore Jiana Rojo got the start in game one and pitched a three-hitter, striking out three in seven innings to pick up her eighth win of the year.

Rojo also credits the consistency on both offense and defense for picking up the victories against the Tigers.

“I think being in and out on defense and then being able to produce runs each inning was very helpful,” Rojo said. “Being able to not stay there on defense for so long and producing runs were the keys.”

After a 1-2-3 inning for Occidental, the Leopards’ offense surged immediately in the bottom of the first inning, when senior right fielder Sienna Kendricks hit a two-run blast to right center to drive in sophomore first baseman Gabriella Underwood.

“It was the beginning of the game, I was just feeling loose and also feeling good from the start of the game,” Kendricks said. “We always practice getting those runners in, so my goal was to just hit it hard and it ended up going over.”

In the bottom of the second, senior center fielder Carly Condon hit a two-out double to center, setting up for junior shortstop Shelby Tevis, who hit an infield single and beat the throw from senior shortstop Cora Roberts.

The aggressive base running distracted the Tigers as Condon was able to score from second, increasing their lead to 2-0 after two outs.

Condon, who experienced offensive woes throughout the season, credits her recent success on staying loose and remaining calm during the game.

“It’s definitely been a struggle for me this season,” Condon said. “But I just started letting loose a little more for today, saying ‘what ever happens, happens’ and I have been spending more time outside of practice working on my swing, building that confidence.”

In the bottom of the third inning, Underwood singled to left field and advanced to second after a wild pitch from freshman pitcher Delaney Russell.

The Leopards led, 4-0, after three innings.

Rojo maintained a no-hitter for four and a third innings for the Leopards, until senior first baseman Madison Romero doubled to left center to break up the streak in the top of the fifth.

However, the Leopards got back to back outs by striking out freshman third baseman Drew Samson and jamming junior designated player Cassie Carter with an inside pitch, causing her to ground out to Rojo.

At the bottom of the fifth inning, Occidental gave up another double from Kendricks, her second of the game.

Senior catcher Melissa Garcia reached on a fielder’s choice as the Tigers got Kendricks out at third.

With one out, junior third baseman Justice Borden singled to right field to score Navarro from second base, increasing La Verne’s lead by one run.

After two shutout innings from both teams, La Verne sealed game one with a final score of 5-0.

The game was ended by the mercy rule after five innings.

Interim head coach Henry Moranchel credits the team’s aggressive base running for their recent success, including the Occidental series.

“We’ve been working on it, they’re just starting to apply it a little bit later in the year,” Moranchel said. “We give them a lot of freedom because they worked that all year and now I feel they’re getting a little more comfortable in recognizing the situations and being able to go ahead and take advantage of that.”

The Saturday losses put the Leopards in a tie with Whittier for fourth place with an overall record of 15-19 and remaining at .500 with at 11-11 in SCIAC play.

CMS continue to hold first place, improving to 27-6 overall and 21-1 in SCIAC, while Occidental remained in seventh place, dropping to 4-29 overall and 3-19 in SCIAC.

La Verne will hit the road to take on Whittier in a doubleheader at noon and 2 p.m. Saturday.