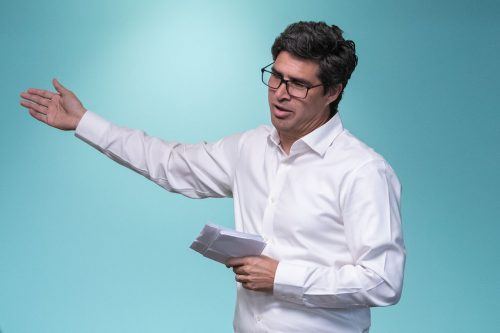 Professor of Political Science Jason Neidleman speaks on his interpretation of political imagination and how it influences philosophy and emotion in his individual work with political theory, Tuesday in the Executive Dining Room. / photo by Ariel Torres

Jason Neidleman, professor of political science, delved into his research about Rousseau and his impact on philosophy and politics during his talk titled “My Reason Chooses the Sentiment My Heart Prefers: Rousseau on Political Imagination.”

Students and faculty filled the Executive Dining Room to listen to Neidleman’s explanation about science, philosophy and emotion in political theory Tuesday.

“Politics is the study of power, how it works, what renders legitimate or illegitimate,” Neidleman said.

Neidleman discussed the importance of truth-telling in politics, the idea of Rousseau’s that people are inherently good, and the Trump administration claiming that they are pragmatic.

“One reason that I am attracted to this idea of politics as storytelling is because typically those things are seen at odds,” Neidleman said. “But if we see both as forms of storytelling and begin to analyze the components of a political story, we can see that as two parts of one overarching larger question of what the structure is of political argument.”

In an introduction to a book, Neidleman wrote that Rousseau believed humans were born without evil. Rousseau believed evil was a product of society and if humans changed the system, then evil could potentially become non-existent.

“In some ways it’s quite an optimistic idea, that what we have to do to save ourselves is get our institutions together,” said Jon Leaver, professor of art who attended the lecture. “If we can rectify society, we can save ourselves. The idea that in order to get ahead we have to put others down, I do not believe that and I do not think that benefits us in any way.”

Rousseau also believed that corruption lived within the arts and sciences because of the immense competition to be recognized by the masses, he said.

Neidleman said the idea of self-love is based off the welfare of the community and that a collective society is a successful one because fewer malice intentions exist there.

He discussed the improper use of the word “pragmatic” and how the Trump administration uses this word to describe the president, despite it not being the best word for his actions.

“I was so interested in how he was tying all of these threads together,” Myra Garcia, senior director university initiatives, said.

“The whole concept of political storytelling and comparing and contrasting what we are experiencing today to other countries around the world.”

Bringing the Storm
Schools may ban cell phone use