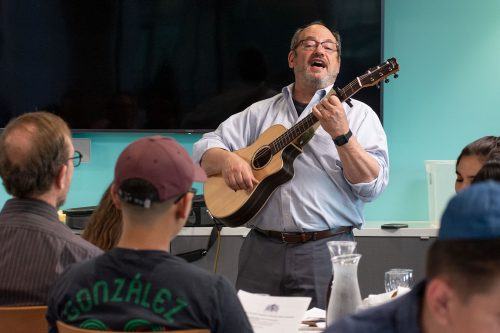 Cantor Paul Buch, from the Temple Beth Israel in Pomona, sings a traditional song that is part of the Passover Seder celebration on Tuesday in the Executive Dining Room. Nicole Temple, junior biology major and president of Hillel Club, hosted the annual event. / photo by Kayla Salas

A crowd of 30 students and faculty gathered in the Executive Dining Room Tuesday to celebrate a model Passover Seder led by Paul Buch.

Buch, cantor at Temple Beth Israel in Pomona, has led the University’s Seder for over 15 years.

“It celebrates a unique aspect of our experience that has tremendous relevance for many more peoples today beyond just the Jewish experience,” Buch said.

“And that’s the idea: that from bondage can come freedom.”

Buch walked guests through the Haggadah, a Jewish text, meaning “the telling” that outlines the different steps, stories and hymns of the Seder, in the retelling of the Jewish Exodus from Egypt.

He started on a light note with the song “Take Us Out of Egypt,” sung to the tune of “Take Me Out to the Ball Game.”

The Seder was organized through the Hillel club and the Office of Religious and Spiritual Life.

“It’s significant to remember this not only because it was a major event in Jewish history and that the tradition of keeping it alive is very important in Jewish culture, but I feel like it relates to modern day because there are still people who are in situations similar to ours,” Temple said. “Situations of bondage, of slavery, of some sort of indentured servitude.”

“So I feel like this is a way to humble us,” she said. “It helps us to reinforce a sense of empathy with one another.”

Not everyone at the Seder was raised Jewish. Senior theater major T. Stribbell says that he has been contemplating converting to Judaism for a while now.

“I was raised in a Protestant Christian family that I walked away from,” Stribbell said. “Realizing my values weren’t shared by the church I was raised in,” he said. “So I looked to Judaism as a religion that does share a lot more of my values and my own personal beliefs.

“With Judaism, one of the things that really drew me to it, is that it’s not just a religion,” Stribbell said. “It is a culture, it is a history, it is a tradition.”

Even those without a religious background were able to appreciate the Seder.

“For me it was really thriving to be a part of a community,” Stribbell said.

“For so much of my personal journey with Judaism I’ve been solitary, and finding these beliefs within myself but not being able to really connect it with the community at large.”

Buch guided the group through the 14 steps of the Haggadah, like the Karpas: the eating of a bitter herb dipped in salt water – symbolizing the tears of our ancestors, and the Yachatz: the breaking of the matzah. He also led the group through traditional hymns like “Eliyanu Hanavi,” a song recognizing and honoring the prophet Elijah.

“Joining the community and joining the culture – it was really great to see everyone come together and feel that connection which to me was very powerful,” Stribbell said.

Temple said that she feels a disconnect between her generation and religion, as often times “religion is forced down their throats” growing up which leads to resentment toward religion.

“(The Seder) also helps to breathe new life into religion and belief because I feel like a lot of my generation strays away from religion because a lot of us had a heavy background in religion,” Temple said.

“It doesn’t have to be all about standing, sitting, kneeling, standing sitting kneeling, but more about community, spirituality and understanding one another.”

Cat is out of the bag: Dogs are better than cats
Student launches clothing brand