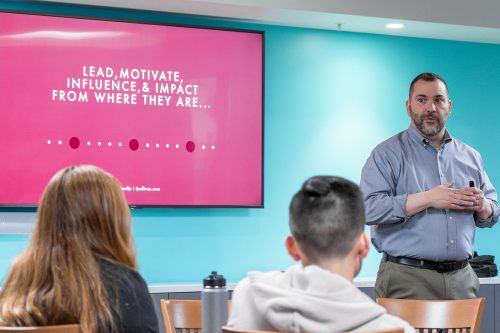 Author T.J Sullivan addresses student leaders of several on-campus organizations in the Executive Dining Room April 11. His book, “Motivating the Middle,” offers suggestions for leaders to motivate other members of their clubs and organizations. / photo by Kayla Salas

T.J. Sullivan, author of the book “Motivating the Middle,” spoke to 15 students and faculty on the various engagement levels of members of an organization April 11 in the Executive Dining Room.

Josh Bay, senior public affairs major, invited Sullivan because he enjoyed reading about Sullivan’s ideas in his book and wanted to spread those ideas to people on campus.

“Sullivan’s ideas are useful not only for fraternities and sororities, but also for smaller clubs, resident assistants, and the workplace,” Bay said. “Bringing Sullivan was good so he could talk and explain thing in ways I could not.”

The book promotes a notion of leadership that focuses not on the most or the least driven members of an organization but on those in the middle. This is based on the idea that students in such scenarios can be grouped into thirds, with the top being most motivated and the bottom, the least.

The top third does most of the work. They send text message reminders, and act as spokespeople for the group. They are always at the table talking to potential new members, Sullivan said. People can have different priorities and be engaged at different levels, he said. They do not have to be the president to be a contributor to the organization. A lot of student leaders who are top third leaders think they are the ideal that everyone else needs to be like them, he added.

The bottom third members have, for whatever reason, disengaged from the organization, Sullivan said.

“(They) drive the top third members crazy by not missing an opportunity to take down and make the organization weaker,” Sullivan said. “We are all bottom thirds somewhere of our lives,” he added.

The last group is the middle third, who care a lot about having balance in all the groups and creating relationships. They are only part of the organization if it works out with their lives and if they can have fun. The middle care a lot about the leaders and will support and help them. They show up to be with friends and do not care about the agenda, Sullivan said.

Tiffany Casillas, sophomore business administration major, is in Delta Sigma Pi and has been around student leaders since joining the sorority.

“A great leader understands how to inspire everyone in the organization or club not in their own vision but in what everyone wants to do to contribute,” Casillas said.

Hannah Rogers can be reached at hannah.rogers@laverne.edu.