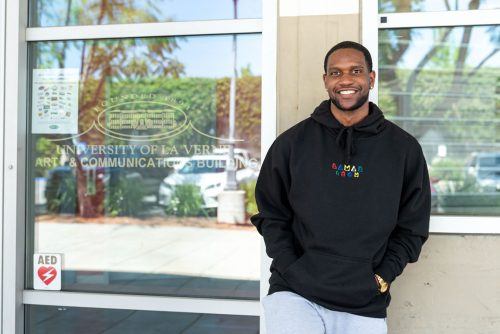 Senior communications major Martaveous Holiday established LamarLeon, his own clothing brand in 2016. The University of La Verne running back always had a love for fashion and decided to create his own brand with a logo inspired by the game Pac-Man. / photo by Katelyn Keeling

Holliday, one of the co-starting running backs for the football team, is the second La Verne football player on campus to historically release a clothing brand.

Following Young’s example, Holliday named his brand to reflect his own lifestyle and values.

“Lamar is my middle name, while Leon means ‘Learn, Evolve, and Outshine Nationwide,’” Holliday said. “The words within the acronym are my core values; they are what I believe in and how I want to live my life.”

Holliday credits his love for fashion and famous street wear brands as an inspiration when he jump started his clothing brand back in 2016.

“This is definitely my other passion besides football,” Holliday said. “I always loved picking out my own outfits when I was younger, so big street wear brands like Bape or Supreme basically inspired me to come up with my own.”

Lamar Leon’s first pieces of merchandise features a matching sweat suit labeled with Holliday’s own logo across the chest of the sweater with another smaller insignia on the right pant leg of the sweats.

Other merchandise includes hats and beanies with a smaller insignia.

Holliday said he was inspired by the classic game, Pac-Man, for his logo design.

“I downloaded the game off the app store, started playing it and I kind of had an eye for how cool the font was so I used it for my brand,” Holliday said.

Holliday has received strong support from his hometown community, Los Angeles, as well as on campus. Two of his close friends have helped with the brand’s release.

“It’s going very well, from him giving me an inside look on how he wants his brand to look, to me going to downtown Los Angeles looking for fabric,” Logan said. “I love the brand because of what it represents, it’s not imitative, it’s innovative.”

“I love how dedicated Martaveous is to his brand,” Gonsalves said. “This has built more of a bond for us off the field because after this football stuff and college is over, we will always be brothers.”

“I would say I like the style; it’s not too bougie, it’s comfortable and you can pretty much wear it with anything,” Dorado said.

Aside from Tuesday’s official release, Holliday hopes to continue to expand his brand. He plans to release new merchandise every month and host a pop-up shop on campus.

“With my official release, I just wanted to get my name out there more,” Holliday said. “Right now, I am just working on more designs which include an ‘80s/’90s theme for my next products.”

Holliday plans to eventually own his own company.

“I want to open a Brick and Mortar,” Holliday said. “Hopefully my brand will grow online and make enough money through sales so I can open up a store.”

Students can find Lamar Leon merchandise on the brand’s official website lamarleon.com as well as on Holliday’s Instagram page @martaveous.holliday.

Dominic Honoré can be reached at dominic.honore@laverne.edu.