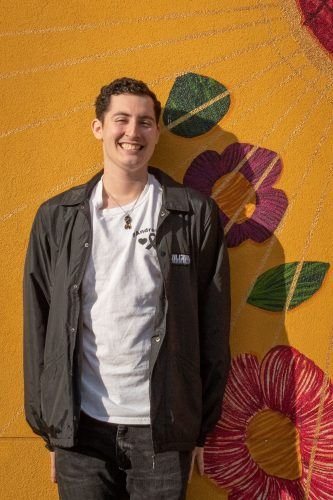 Andrew Tompkins, sophomore business administration major and former diver for the University, celebrates being cancer-free by inspiring others with his personal motto, “Andrew Wins.” He was diagnosed with bone cancer in 2017, and took a year off from school to beat the disease. / photo by Jaysin Brandt

After taking a year off to receive 18 rounds of chemotherapy with three different chemotherapy drugs, three surgeries and plenty of physical therapy sessions to learn how to walk again, Andrew Tompkins, sophomore business administration major, has returned to the University of La Verne.

Tompkins initially noticed his knee was inflamed during Thanksgiving break and never imagined it was a result of cancer.

The doctors thought it was a meniscus tear or bursitis which is fluid in the knee, but instead found it was a type of bone cancer called osteosarcoma.

“I went to get an x-ray to see if there was fluid in my knee and they found holes in my femur instead,” Tompkins said. “At first I was like, ‘Oh my God, I have a flesh eating bacteria,’ but then I realized my flesh was fine, it was my bone. I got an MRI five days later and the next day they said I had cancer.”

“My dad was searching for a notepad and started writing down dates for chemotherapy,” Julia said. “Chemotherapy is not typically talked about unless it is cancer, so my first thought was ‘Am I hearing this right?’”

“My dad thanked the doctor and we all went back outside to sit,” Julia said. “My dad is a strong firefighter, and not one to show much emotion. After the call he just starts crying and said, ‘Son if I could carry this cross for you, I would.’ and that is when I knew it had to be cancer.”

During Andrew’s time in the hospital, Julia said she tried to be her brother’s clown and best friend. She remembers a time when laughter took over a time of excruciating physical therapy pain for her brother.

After Andrew’s leg surgery, the physical therapist drew funny faces on hospital socks that they took home the next day, Julia said.

“‘Mamma Mia 2’ was our jam,” Julia said. “I put the puppets on my hand and we were lip syncing to ‘Mamma Mia 2’ which was the funniest thing ever.”

Andrew said the hardest part of his journey was seeing his friends continue on with their lives while he was in a stagnant and terrible place.

“They were still able to live their lives normally while I was stuck in a hospital receiving chemo,” he said. “I understood my friends had lives to live and of course I did not want to prevent them from living their normal lives, but it was hard to see them do that while I was not able to do the same thing.”

Tompkins had three surgeries in total: an emergency appendectomy, a surgery to insert a port catheter into his chest to receive chemo and a leg surgery to remove 14 centimeters of his femur that had the cancer and input a prosthetic in his leg.

Tompkins said learning how to walk again was a tedious and frustrating process.

“I had already known how to walk for 19 years of my life and then all of a sudden I couldn’t anymore,” Tompkins said. “People would walk to go get a drink or use the bathroom, and I could not do that. I needed a walker or someone to help me up.”

Before his diagnosis, Tompkins was on the diving team at La Verne. When he was given the options for surgery none gave him the ability to ever dive again.

Diving was his escape and area for growth; he currently holds a La Verne diving record and qualified for the NCAA Division III Regionals his first semester on the team.

“My dive career ended with my cancer diagnosis,” Tompkins said. “It was very hard because I was not prepared for it. I still felt like I had a lot left in me before I had to give up the sport.”

Tompkins is now helping coach the diving team on a volunteer basis.

“I really enjoy helping out because it is the closest I can get without physically diving again,” Tompkins said. “If I can just use my diving knowledge of 12 years and live through the diving of others, then I would rather have that than no diving at all.”

Tompkins said his transition back to school was overwhelming since he was completely dependent on others for nearly everything during his time in the hospital.

“I was also very excited because I knew the minute I had a withdrawal from school that I just really wanted to be back,” Tompkins said. “I knew when I returned to school it would be a sign that I had beaten cancer and gotten through this journey. My first day back was scary and I was nervous. But I fought really hard to get back here, so I will not let that opportunity slip away.”

Julia said seeing her brother back in school is an indescribable feeling and makes her happy to see, but she misses him.

“I know my brother is doing so much good,” Julia said. “He was just telling me how he got back into the pool the other day and that just made me smile.”

Julia said if she could describe her brother in one word, it would be courage.

“If you ever need him he is going to have an answer for you,” Julia said. “Whether it takes him five seconds to answer or he does the research behind it, he will get you the answer. He is so uplifting and good at finding the silver lining in situations.”

Briana White, senior theater arts major, is one of Tompkins’ closest friends who has supported him throughout his year-long journey.

“It was a little harder for me to be there physically for him since he does live in San Diego,” White said. “I went down every couple months just to see him, so I tried to maintain that constant communication and show my support for him.”

White said it is interesting to pick up where their friendship left off a year ago since Tompkins is in the same place but with a new mindset.

“It is surreal to have him back on campus,” White said. “The year he was out felt like such a long time but now that he is back it feels like it was yesterday this all happened. It was hard to go from having him every day, to him being gone for an entire year.”

White said Tompkins is one of the kindest people she knows and he taught people how to fight a life threatening illness with kindness and love.

“He brought a lot of awareness to not just osteosarcoma, but battling any disease in general,” White said. “Anyone who has met him or who has been a part of his journey is really lucky because he is inspiring to everyone. It was amazing to be a part of his journey, and we are lucky he fought so hard and never gave up.”

Tompkins said his dream job after he finishes college would be to work in the marketing department for the Make-A-Wish Foundation.

Working with children who are battling life threatening illnesses would be his way of giving back, he said.

“I would be able to grant them a wish of their choice and allow them to have some hope or motivation to keep fighting through such a terrible process,” Tompkins said. “It would be my way of passing it forward to all the doctors, nurses, family members and friends who helped get me through my own horrible process.”