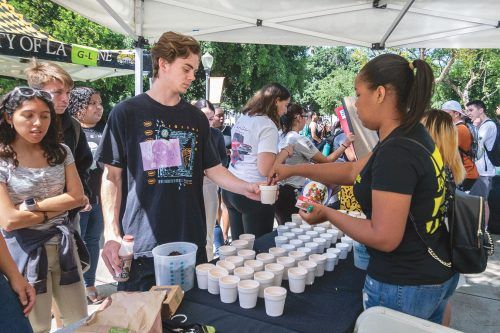 Freshman communications major Alex Pignataro receives wildflower seeds from Stephanie Joseph, sophomore communications major, at the Campus Activities Board booth at the Earth Day Fair in Sneaky Park Wednesday. Other clubs also had their own booths. / photo by Molly Garry

The Office of Student Life hosted an Earth Day fair in Sneaky Park Wednesday with various booths to raise awareness of sustainable efforts.

Senior public relations major and student club coordinator Joshua Bay, who worked on the event, said the Earth Day booths are intended to approach something serious in a fun way.

“It’s a mixture of sustainable efforts,” Bay said. “Each (booth) has different themes regarding sustainability, like the Flint water crisis and plastic in the oceans.”

One club, the International Student Organization encouraged students to bring recyclables to their booth for a chance to win a Starbucks gift card.

They also shared statistics emphasizing the effect of pollution in the Earth’s oceans, including that in 2017 there was 348 million tons of plastic produced globally.

ISO also shared the staggering statistics about the amount of plastic dumped in the ocean and found at beach clean-ups.

Plastic not recycled can take 450 years to decompose, they told visitors to their booth.

One table made sun clocks from paper plates and wooden dowels.

Another potted small plants from seed bombs, and another encouraged conversations about the Flint water crisis, while another hosted a mini flea market, which included a clothing swap to raise awareness about sustainable fashion.

Students let loose at Astroverne
Cat is out of the bag: Dogs are better than cats