By Campus Times Editorial Board, Danielle De Luna on April 26, 2019 in Editorials, Opinions 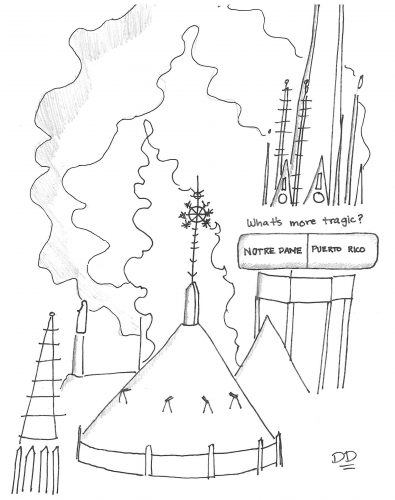 The Notre-Dame Cathedral located in Paris must undergo major renovations after a massive, devastating fire broke out on April 15.

Much of the wooden roofing has been destroyed, the spire has collapsed and the interior of the building may have sustained not only damage from the fire, but also from the water used to put the fire out.

Although completely devastating to hear of such a historical, religious relic being destroyed, what is even more devastating is the series of historically black church burnings that have happened over the last two weeks in Louisiana, especially considering the fact that the fire at the Notre-Dame was accidental, and those in Louisiana were not.

President Trump would rather extend help toward an already wealthy organization, the Catholic Church, than provide relief to those still suffering from the hurricane in Puerto Rico, those without clean water in Flint, Michigan, or the several black churches that have gone up in flames throughout the year alone.

Mount Pleasant Baptist Church, St. Mary’s Baptist Church and Greater Union Baptist Church were all set ablaze within only nine days in St. Landry Parish, Opelousas, Louisiana. The man who was arrested for starting the fires, 21-year-old Holden Mathews, was charged with arson and violating the state hate crime law, but additional federal charges are still being considered, according to the Associated Press. All three churches were known to be well over 100 years old.

The Trump Administration has attempted to decrease and ultimately block relief funding to a ravaged Puerto Rico based on its prior failing economic status, something of which has been described as a “decades-old spending crisis that has left the island with deep-rooted economic problems,” according to White House spokesman Judd Deere.

Denying relief aide to a territory devastated by Hurricane Maria should never be an option, let alone an option based on past misfortune. Flint, Michigan, has endured a water crisis since 2014.

After a new pipeline from Lake Huron to Flint was built, a switch to water from the Flint River was implemented which thus resulted in the outbreak of bacteria like fecal coliform, a possible E. coli contamination and heavy traces of lead.

Tests in 2015 conducted by the Environmental Protection Agency and Virginia Tech indicated dangerous levels of lead in the water at resident’s homes. Lead composure not only affects the heart, kidneys and nerves, but can also lead to behavioral disorders, hearing problems and delayed puberty. With this level of devastation running rampant through American soil, it is hard to understand why our administration is so quick to offer aid the Catholic Church, an institution that does need our financial help. Instead, the administration has chosen to deny helping those in need in their own territory.

Although this is upsetting, the accidental burning of the Cathedral still does not amount to the horrific actions of a country which has suffered through a rise in hate crimes due to the president’s rhetoric, a refusal of aid to territories ravaged by natural disasters, and ignoring the pleas of those dying from their tap water. Hearing that President Trump would offer aid so quickly to those across the sea, but continue to ignore the cries for help in his own country is an outrage and reason for anger.

Much of the time Republicans want to preach that they must protect their own before anyone else, but with this scenario alone it seems as though “their own” is not a reference to the American people as a whole.