By Campus Times Editorial Board, Danielle De Luna on May 17, 2019 in Editorials, Opinions 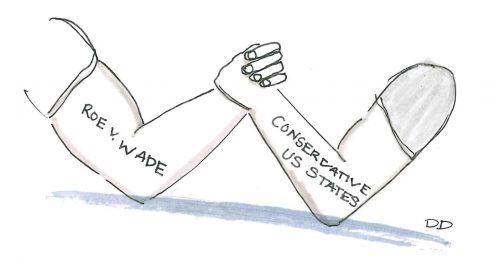 Red states are passing bills prohibiting abortion with more extreme provisions than ever before and at an extremely alarming and dangerous rate. States like Georgia, Alabama and Mississippi are basing their arguments on the notion that a women’s rights on what to do with her own body, is ultimately not her own decision. The intention here is to infringe on her autonomy, and furthermore incite a legal challenge so that the cases against these laws will be visited by the Supreme Court, with hopes of overturning Roe v. Wade, a landmark case that has historically protected abortion rights.

A law prohibiting abortion as early as six weeks passed in Georgia on May 7. Living Infants Fairness and Equality Act, nicknamed the Heartbeat Bill, allows abortion only in cases where the pregnancy threatens the life of the mother, or in cases of rape. In the latter case, the mother is required to file a police report.

This bill poses two problems: one, many women do not even realize they are pregnant by six weeks. Six weeks is one or two missed periods, which is not an uncommon experience for women who experience irregular menstrual cycles. Two, many women are reluctant to file police reports of rape as it is.

According to statistics from the Rape, Abuse and Incest National Network, only 23% of rapes and sexual assaults are reported to police, and only 4.6% of reports lead to arrest. These problems in conjunction with each other reveal a profound ignorance of both biology and the experiences of sexual assault survivors.

A bill nicknamed the Human Life Protection Act, signed by Alabama Gov. Kay Ivey on Wednesday, makes performing an abortion at any stage a felony punishable by 10 to 99 years or life in prison for the provider.

The bill once had an amendment permitting abortions in cases of rape or incest, but on May 9, that amendment was stripped. The only exception the bill offers is if the pregnancy poses a serious risk to the health of the mother.

Other states that passed similar bills include Mississippi, Kentucky and Ohio, their lawmakers clearly incentivized by both Trump’s support and a now majority conservative Supreme Court. It is not beyond these lawmakers that their bills pose an obvious conflict with rulings such as Roe v. Wade; sparking a legal challenge is exactly their plan. In any case, this is a part of a larger phenomenon in which the rights ensured to women under landmark cases like Roe v. Wade are being chipped away through all levels of American government.

Trump has expressed opposition to legal abortion throughout his presidency. In January of 2018, he released a statement urging the Senate to pass the Pain-Capable Unborn Child Protection Act. Authored by Sen. Lindsey Graham (R-SC), the bill would have prohibited abortions past 20 weeks except in cases of rape and incest.

To boot, his Supreme Court nominee of choice was Brett Kavanaugh, who had an established track record of attempting to restrict abortion rights. In doing so, he assured a majority conservative Supreme Court that these lawmakers now will challenge the constitutionality of Roe v. Wade.

Some believe the court will opt instead to slowly chip away at abortion rights through allowing certain restrictions, rather than overturning Roe v. Wade outright. Despite the optimism of such individuals, the potential for a now-majority conservative Supreme Court to chip away at abortion rights in any capacity is cause for alarm. We must collectively protect abortion rights in any way we can, whether this means donating to grassroots organizations, acting as clinic escorts for patients or staying vocal about the damage such restrictions have on the lives of women.