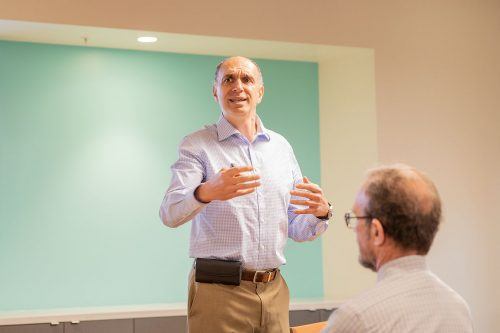 Associate professor of management Omid Furutan explains the percentages of bribery in the business world Tuesday in the Executive Dining Room. Furutan considered the different causes and consequences of bribery in Eastern Europe countries. / photo by Jaren Cyrus

Associate Professor of Management Omid Furutan discussed the inevitability of bribery, and how it differs from extortion before 15 students and faculty members Tuesday in the Executive Dining Room.

During his lecture, “Bribery: A Necessary Evil,” Furutan considered the different causes and consequences of bribery in Eastern European countries.

Bribery has complex reasons across cultures and nations, he said.

“There are four main reasons bribery is unavoidable,” he said. “Flaws in the legal system, lack of democratic traditions and political accountability, social and economic difficulties, and low pay for public officials.”

He described extortion as people in positions with a certain authority demanding money from someone and, in return, giving them what should have originally been rightfully theirs.

Furutan said an example of extortion is one where a physician could ask a patient for money in return for keeping his or her place on the long list of scheduled surgeries. If the patient refused, the physician would bump that person’s name to the end of the list.

“In the United States, in many cases, democracy allows for competition… allows me to simply go to a different doctor,” Furutan said.

Furutan said that because physicians in countries like Slovakia were underpaid and private practice was not allowed, accepting bribes and extorting others became normalized.

In a way bribery and extortion are seen on every day in the U.S. through fast track passes and front of the line passes at amusement parks, Al Clark, professor of humanities, said.

“Bribery, as the definition says, goes against the common ethical guidelines,” Clark said.

Furutan asked the audience whether giving in to extortion or a bribe is ethical.

“In the case of extortion, it is more of a fear-based decision than it is a moral one,” Melinda Pagani, junior business major, said.

Furutan said that giving in to extortion can be illegal in the United States. However, it is neither legal nor illegal in most countries in Eastern Europe.