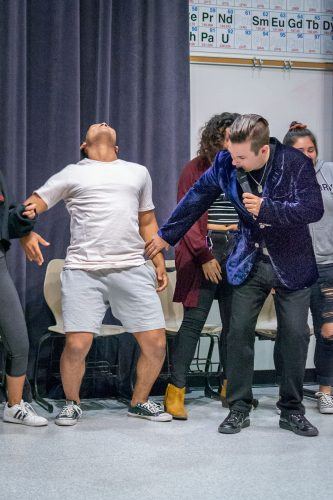 David Hall, a hypnotist from Massachusetts, hypnotizes sophomore business administration major Marcus Blevins to do the Harlem Shake. Blevins also performed as Beyoncé during the event. The Campus Activity Board held the interactive performance on Monday in LaFetra Lecture Hall. / photo by Molly Garry

“I get surprised just watching how they interact and what they say on stage and today was very funny,” Hall said. “The different things they did on stage was funny and made me laugh too, and I was having a lot of fun just as well. Every show is very different and you get to watch the show as well.”

Hall explained that hypnosis is a natural trance state and everyone experiences it every day.

Cards Against Hypnosis was played like the game Cards Against Humanity. The audience was dealt two cards, first a black suggestion card that is blank, then a white card with two outcomes to be chosen. The participant performed the outcome the audience chose on stage.

“I saw a show years ago and I thought it was the funniest thing. That is how I really got interested in hypnosis,” Hall said.

Hall turned down the lights, played soft music and had the crowd be completely silent while he put participants in the hypnotic state.

Hall picked one person to act and perform as Beyoncé. Marcus Blevins, sophomore, business administration major, was chosen to be Beyoncé, and he embodied her completely.

“My favorite part was especially when I was Beyoncé,” Blevins said. “I just starting dancing I could believe I was Beyoncé it was weird he told you something and you just do it right away the first thing that comes to your mind just do it. You don’t think twice, you just do it.”

Hall also made all 10 students believe they just won the jackpot at a Las Vegas casino. When the participants sat up, they all were in shock and a couple students jumped in excitement.

Zitally Alvarez, junior psychology major, was a participant in the performance. She jumped and ran around saying she needed to call someone about winning.

“My experience on stage was good and fun but also a little embarrassing because you were aware of what’s going on and I think it is a good experience to go through,” Alvarez said.

At the end, Hall asked the audience if they would want to get hypnotized and a lot of students said they wish they were hypnotized.

“The event itself was hilarious because they weren’t told to do anything they didn’t want to do,” said Evelyn Pina, sophomore biology major. “It was mainly “suggestions” and they did them.”

Hannaha Rogers can be reached at hannah.rogers@laverne.edu.