By Ashley Villavicencio, Dominic Honoré on May 17, 2019 in Feature Slider, Softball, Sports 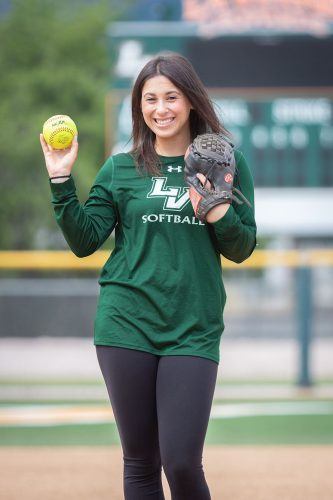 Outfielder Carly Condon graduated in January with a bachelor’s degree in business administration. She played for the softball team for all four years of her eligibility. / photo by Ashley Villavicencio

It is not often that a team is consistent year after year in winning championships. When a team is so good for so long, the word ‘dynasty’ comes to mind. The only thing harder than winning a championship is maintaining that level of consistency that got you there in the first place, season after season.

However, there is only one group that was there from the beginning.

Seniors Sienna Kendricks, Carly Condon, Rachel Ogata, Michelle DeGuzman and Melissa Garcia are the only ULV athletes who have three championship rings to wear on their fingers.

They were freshmen when the Leopard softball team brought home their first SCIAC championship in 12 years.

Over the course of the next two seasons they developed right alongside the program which brought in two more consecutive championships thereafter.

Former head coach Julie Smith said the three championship teams from 2016-2018 were different than other La Verne softball teams that she has coached.

“I think there was a stronger sense of connection within those three teams,” Smith said. “They had chemistry, love for each other and camaraderie in the fact that they were all going for the prize.”

However, after the players’ junior year, paths would split between the five players.

Four out of the five of the women – Kendricks, Condon, Ogata and DeGuzman – would graduate early.

With DeGuzman taking a job offer following graduation and Garcia set to finish her four-year career and graduate that upcoming spring, the remaining three seniors who formed the Leopards’ outfield, had a choice to make.

Ultimately, despite them no longer being full-time students, Kendricks, Condon and Ogata chose to stay for their last season of eligibility in hopes of finishing their careers with a four-peat.

“It meant the world to us to go out and play for that fourth ring because it would have completed our careers the right way,” Condon said.

Kendricks was a stud coming out of Bullard High School in Fresno.

She was a four-year player on varsity, earning California Third Team All-State honors her sophomore year, First Team All-CIF her junior and senior years as well as CMAC Player of the Year her senior campaign.

She said she picked La Verne because of the small school feel but also because of the strong sense of pride that she felt within the athletic department when she toured the campus.

“The school was small and diverse which was what I was looking for but also the softball program was really good and the field was beautiful.” Kendricks said.

Kendricks would go on to start at right outfield all four years of her college career as well as be a leading batter on the team with a batting average of .356, 11 home runs and 87 RBIs.

Defensively, she finished her career with a fielding percentage of .949.

Kendricks earned First Team All-SCIAC three times during her freshmen, junior and senior seasons while earning Second Team All-SCIAC her sophomore season. In her senior year she would go on to earn All-Region honors for the first time in her career, being named to the Second Team All-West Region by the National Fastpitch Coaches Association.

She said she chose La Verne because the university really gave the balance of it means to be a true student athlete.

Like Kendricks, Condon started early in her career as a freshman which she said she did not expect.

“Before I actually came to La Verne, I noticed that there were so many girls on the team and I thought I wasn’t going to get to play very much,” Condon said. “But then I come in and there are only 14 girls.”

After an unsuccessful stint at second base for a few games Condon moved back to her natural position at center field where she would go on to start the rest of her career while also contributing heavily at bat.

She finished her career with a batting average of .309 with nine home runs and 80 RBIs. Defensively she went out with a fielding percentage of .961 earning her First Team All-SCIAC twice in her sophomore and junior campaigns.

Rachel Ogata, coming out of Foothill High School in Tustin, played three years on varsity and finished her senior year as a team captain with Second Team All-League honors and a personal coach’s award. Because of this she felt like she was ready to be a college athlete.

“When playing travel ball my coach told me all about what to expect and my sister played college softball so she told me how hard I was going to have to work with such a busy schedule,” Ogata said. “So, I think I came in prepared.”

Ogata was the third member of the Leopards’ triple threat in the outfield that started back in 2016.

Although never winning any personal league honors, Ogata would become famous her senior year for her clutch diving catches in the left outfield.

She finished her career with a fielding percentage of .975 defensively while finishing on offense with a batting average of .308 with only one home run and 40 RBIs.

Unfortunately, the seniors’ quest for a fourth championship was unsuccessful as the softball team finished their 2019 season with a record of 17-23 overall and 13-15 in SCIAC, finishing in fifth place.

With Smith’s resignation following the team’s 2018 championship, the Leopards were in a transition phase under former assistant coach Henry Moranchel, who was named interim head coach.

Ending their season just out of the top four, the team was unable to make it to the conference postseason tournament.

However, they did finish the last game of their careers with stellar performances.

In the second game of their final doubleheader against Pomona-Pitzer, all four seniors remaining were responsible for all 10 RBIs in the game.

With their close friend and former teammate DeGuzman watching in the stands, the four teammates led their team to a 10-2 victory.

Dominic Honoré can be reached at dominic.honore@laverne.edu.