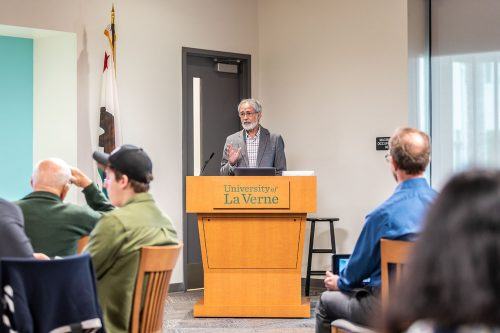 Hector Delgado, professor of sociology, discusses his future plans after retirement. Delgado plans to move to Atlanta to be a political activist, among other things. His last lecture took place in the Executive Dining Room on Tuesday. / photo by Jaren Cyrus

Professor of Sociology Hector Delgado reminisced about his life accomplishments and emphasized the importance of acknowledging and thanking the people who have made a positive impact on one’s life at his final lecture titled “It Takes a Barrio” Tuesday.

Delgado shared that when he started the first grade and did not know a lot of English, he was not able to understand directions in class because of the language barrier. But he still got in trouble for not doing an assignment correctly.

After his parents got involved, he was transferred into another class with a different teacher, who encouraged him.

“This (teacher) was someone who was about 35 years ahead of his time,” Delgado said. “He took me and another Puerto Rican kid in a similar situation and by the end of the year we were his best two students. From the moment that I went into that class, I loved school.”

One if his few regrets, Delgado said, was that he had not let his teacher know how much of a difference he made in his life. He said he feels indebted to that teacher for the position he is in today.

Delgado also mentioned that sports were an integral part of his life when he was younger, having played baseball and basketball.

“Being part of the team was always important to me,” Delgado said. “You’re part of something larger and it’s another reminder that your success, even if you’re the star, really depends on other people doing what they are supposed to be doing.”

Delgado said that he continued his sports career into college, but ran into a coach for the baseball team that changed his direction.

The coach made derogatory remarks about Delgado regarding his ethnicity, and that made him ultimately quit.

“That coach, being the bigot that he was, actually had an influence on my life in a positive sort of way,” Delgado said. “I became much more involved on campus and was a conscientious objector to the Vietnam war.”

Throughout the lecture, Delgado shared photos of him and his family, telling stories of his time spent with them.

“I was always my bravest when my brother was around and I was with him a lot,” Delgado said. “To this day he is still someone I’m very close to.”

Delgado said that it is important to thank the people who have had an especially positive impact on your life, whether they are a teacher, a colleague, family and friends, or even a stranger.

“We are all books in a sense and you think that you’re the only author, but it’s not, it’s co-authored,” Delgado said.

Delgado said the lecture’s name, “It Takes a Barrio,” was his own version of the saying “it takes a village.” He said that no matter how people get through life, it is the barrio, or community, that are always there for you.

“No matter where you go, the barrio goes with you,” Delgado said.

Al Clark, professor of humanities, said that Delgado shared details of his life that Clark did not know.

Carla Gutierrez, junior criminology major, said that Delgado’s final lecture taught her that there is not a lot of time to do everything she wants, but to keep fighting on for what she believes in.

“Time flies really quickly, and he has made so many amazing accomplishments throughout his life starting from where his life started to where he is now,” Gutierrez said.

Sophomore political science major Jonas Poggi said that after the lecture he realized the importance of seeing the impact he has on other people’s lives and the impact others have had in his life.

“In an individualist culture that we live in the United States and most of the western world, it’s important to think of others and how they have impacted our lives and what we owe to them,” Poggi said.

Adam Pepper, sophomore political communication major, said that the message of people helping others in their life makes him want to use his time wiser but feels no pressure to accomplish everything while in college.

“Getting a retrospect of someone’s entire life makes you realize how small and little of your life you’ve actually lived while in college, and how much you have ahead of you to make a change,” Pepper said.