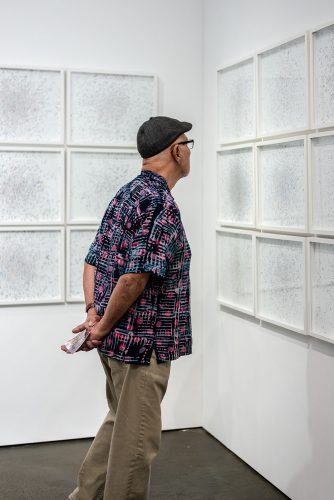 Raoul Cervantes, Claremont resident, examines an art piece of frames depicting U.S. states, made up of cities within that state, at the Claremont Museum of Art. The exhibition “Displacement Zero” opened May 10, presenting the work of Andrew Wenrick, who reconstructed shapes and designs by using cutouts from paper maps. The Art Walk opening reception will start at 6 p.m. June 1. / photo by Nikky Huynh

Andrew M. Wenrick, former architect and current conceptual artist, presented his “Displacement Zero” exhibit, showcasing the deconstruction and restructuring of geographical maps at the Claremont Museum of Art this weekend.

The exhibit included over 60 pieces ranging from picture frames to skateboards.

Wenrick’s piece “Stars and Stripes,” which was made over the span of three years, is composed of 50 picture frames all the same size and each represented a different state.

Wenrick cut out the names of the different cities in each state and reconstructed a distinct type of map in which the density and clutter represent the location and distance of the cities.

Maria Trinidad, junior studio art major at Norco College, said she found it fascinating how Wenrick created a new way to look at the population and busyness of a state.

“I think it’s very interesting that they put California and Massachusetts next to each other,” Trinidad said. “They are on completely different extremes and Andrew made this super clear with his work.”

The picture frame representing California was compressed with very little white space in the outer areas. On the other hand, Massachusetts’ frame was much more sparse in white.

Wenrick included a series named “I did…” which incorporated skateboards attached to light bulbs and lines of map networks from real American cities and road systems.

Shary Omana, psychology major at Citrus College, said out of the whole exhibit, the “I did…” collection caught her eye the most. She said the boards were a very distinct form of art.

The boards were painted matte black, which made the road lines stand out. Three light bulbs were lined right down the middle, some lit up while the others were stuffed with cut out roads and highways from a map.

“It’s truly amazing what he did here. He used his background as an architect and his childhood in Claremont to make everything so accurate, precise, and unique,” said University of La Verne alumna Melissa Lach.

Lach said Wenrick was influenced by his nostalgia. He grew up skateboarding in Claremont and using maps while on road trips with his family.

“This exhibit is a lot more youthful compared to ones we’ve had in the past,” Lach said.

Jerry Leon, Claremont resident, said he truly enjoyed Wenrick’s exhibit because he also grew up skateboarding with his friends in the community.

“I really like how he put two things, that seem so different, together in one,” Leon said. “Who would have thought geography and skateboarding would pair so well.”

The exhibit will run through Aug. 25.

The opening reception will take place at the monthly Art Walk from 6 p.m. to 9 p.m. June 1.

The museum is open from noon to 4 p.m. every Friday, Saturday and Sunday.