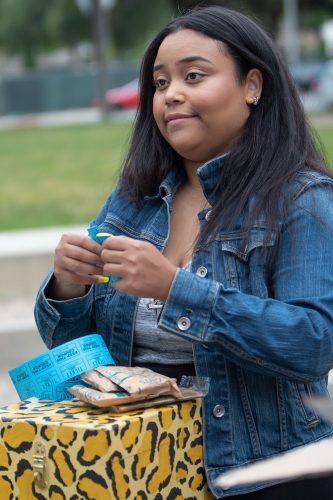 Campus Activities Board co-chair and senior communications major Alexis Patterson hands out raffle tickets to donors at the Hope 4 Homeless Youth campaign Monday in Sneaky Park. The event was sponsored by CAB to raise awareness for the campaign and homeless college students. / photo by Ariel Torres.

The Campus Activities Board teamed with the Hope 4 Homeless Youth Campaign and the Church of the Brethren to collect food and clothing, and to raise awareness of homeless college students on Monday at Sneaky Park.

Students were urged to donate old clothes and canned goods, and learn about the all too common realities of the lives of homeless college students, who make up 9% of college students nationwide according to recent research.

“I know it is something that needs to be dealt with, but not a lot of people see homeless college students,” April Matamoros, senior psychology major, said.

Many of the students who attended the event were happy that CAB was raising awareness.

“I really like this event because students already plan to give things away during their moving out process, but with this they can give to people who really need it,” freshman education major Abrelle Negrete said.

Senior art history major Damairis Lao said she can relate to those who have insufficient funds.

“I know other students on this campus who are also facing similar experiences,” Lao said. “It is something that isn’t normally talked about.”

The event also served as a way to collect data on the perception of homeless people and the stigma they face.

Students were asked to participate in a six-question survey that asked about people’s perception of the homeless.

One question displayed two pictures of different types of homeless people, and asked the participant choose which one they thought was homeless.

“You don’t know that person’s situation,” Jerry Solorzano, senior business administration major, said. “You don’t know what is going on in their lives that becomes the reason why they are homeless. And I feel like the stigma and shaming needs to go away… We should be trying to help them out.”

The lack of affordable housing is the primary cause of homelessness, according to the National Law Center on Homelessness and Poverty.

The organization also found that low-income housing has decreased since 2011.

The problem might be even more serious in California as a recent study found that 19% of students attending California’s community colleges report experiencing homelessness in the last year. Meanwhile 60% report recent housing insecurity, and another 50% experienced food insecurity, according to a study by the Hope Center for College, Community and Justice at Temple University, conducted between 2016 and 2018.

Christine D. Insigne can be reached at christine.insigne@laverne.edu.