By Campus Times Editorial Board, Danielle De Luna on May 3, 2019 in Editorials, Opinions 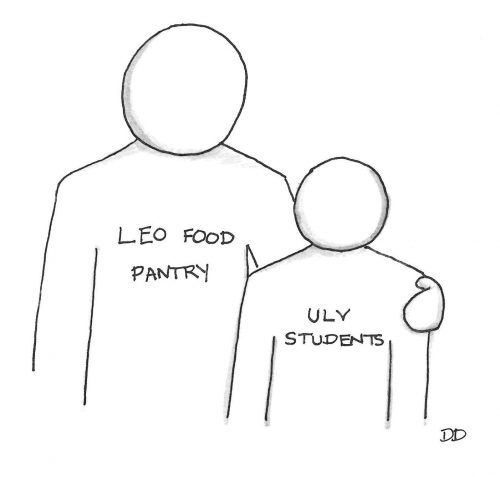 Food insecurity is surprisingly high among college students. About 36% of university students in the United States are food insecure, according to a study conducted by Temple University and Wisconsin HOPE Lab.

Leo Food Pantry, which was put in place in 2016, is coordinated by the Office of Religious and Spiritual Life and runs on both food and monetary donations, the latter primarily coming from ULV staff.

Not only is the pantry a necessary and valuable addition to the University, it is essential to maintain the pantry because it is assisting our student population, who would otherwise be left hungry.

As for the University of La Verne, a group of honors students conducted a survey about food insecurity as part of their senior project. From the 200 responses they received, they learned that one third of the student population faces food insecurity. The Leo Pantry exists specifically to address student food insecurity, and its user base is only going up.

Food insecurity is a larger problem than we thought, and we should not assume that we are shielded from the problem by virtue of attending a private institution.

The program gives out monthly food boxes to those who sign up, and the boxes this month were distributed at Vista La Verne Residence Hall. The boxes are meant to last a week. They include canned soup, beans, vegetables, pasta, tomato sauce, crackers, peanut butters, fruit cups, canned meats, breakfast items and prepared dinners such as Mac n Cheese. Those who sign up can disclose any food restrictions they have and get a customized package.

The Campus Times asked Myrna Hugo, office manager at the Office of Religious and Spiritual Life, for the raw numbers.

The common perception around private universities is that they are expensive and inaccessible, which would translate to a wealthier student body due to financial barriers that would stop students with lower incomes from attending.

However, this does not apply to every student at the University. ULV freshmen receive, on average, a financial aid package of $35,259 and 98% of freshmen receive aid, mostly in the form of scholarships and grants, according to collegefactual.com.

You can sign up for the Leo Food Pantry package or give a donation to the program at laverne.edu/chaplain/student-food-pantry.