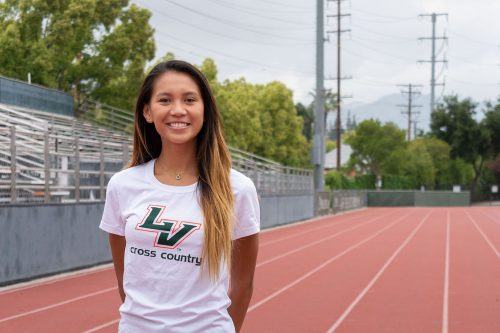 Senior distance runner Melissa Cerrillos placed second in the women’s 1,500-meter at the SCIAC championship meet hosted by Claremont-Mudd-Scripps April 27 and 28. Her time of 4:40.54 was third best in La Verne history. / photo by Kayla Salas

The La Verne track and field teams finished their Southern California Intercollegiate Athletic Conference season in Claremont with a trio of personal bests.

Both the men’s and women’s teams gave the other SCIAC schools a run for their money in the conference championships April 27 and 28 with several athletes leading the charge.

The La Verne men’s 800-meter record holder, sophomore Matthew Salas, finished second in the 800, clocked in at 1:52.65 to make his first ever All-SCIAC performance.

Senior distance runner Melissa Cerrillos also added a second-place finish for the weekend in the women’s 1,500-meter with her new personal best of 4:40.54.

It is the third best women’s 1,500-meter time in La Verne track and field history.

Junior thrower for the Leopards Matthew Pedroza earned his first SCIAC appearance on the podium in three of his events.

For both men’s shot put and hammer throw he is ranked ninth in La Verne history.

Salas was unable to run at his full potential last season due to an ankle injury, this year, he feels even more invigorated to perform.

“Last year I was running well and got hurt later in the year and it really just fueled me to run faster this year because I knew I could have accomplished more last year,” Salas said.

There was no holding back coming into the season, and Salas said he knew he had to switch a few things up to ensure he broke the school record and accomplished a new personal best.

His “ultimate goal” was to win the race and finish around 1:54.10, the La Verne school record set by distance runner Michael Sacoto in 2011.

“What I have been working on now is to strategize my races, planning every little bit of my race, I strategized exactly what I was going to do at every moment,” Salas said.

This strategy worked in Salas’s favor because he did not just set a new school record, but he crushed it with a time of 1:52.24. 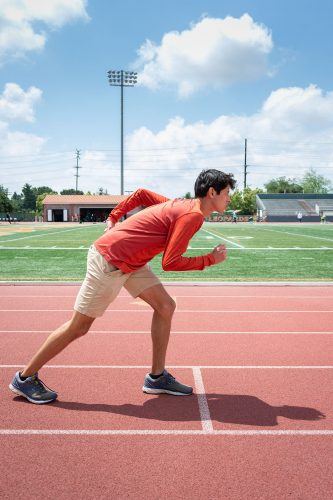 “When I crossed the line I saw 1:52 and was like, ‘That’s a school record,’ but I wasn’t surprised. I knew I could run it, I just needed to run it. I knew it was going to happen if I followed my plan and my goal,” Salas said.

He plans on putting in the miles this offseason to gain the strength necessary to continue to break the school record.

For the Leopards, the common denominator is gaining strength in the offseason.

Pedroza also expressed the need to gain strength and flexibility to reach the top the podium next season.

“The broader goal is to put some respect on La Verne. This college has done a lot for me, I feel like I can make a name for myself when competing and just want to put us on the map,” Pedroza said. “I want La Verne to be noticed in track and field.”

The junior thrower is excited to return next season because he fell he could make an impact in the league and advance to become one of the top throwers.

Pedroza is in the process of switching up his technique from the glide to the spin in order to see if it can get him where he wants to be.

“It comes down to how you shape up in big time meets,” Pedroza said. “Big time people are going to take big time plays.”

Cerrillos came out strong for her season after breaking the school record in the 800-meter with a time of 2:15.87.

This season, her main focus was on the steeplechase as this was her main event, and she said she wants to go out on top.

She is currently ranked 12th in the nation for steeplechase, there are many athletes across the country who are still competing.

Looking forward to Saturday, there are big stakes for Cerrillos to either hold her spot for nationals or gain a position.

“My goal at Oxy is to get a faster time (and) not get knocked off the list,” Cerrillos said.

Being a senior, this season is Cerrillos’ last chance to make a name for herself in the Leopard community and break yet another record. Cerrillos likes to keep in mind,

“Who I’m competing for and why I am there in the first place, I always try to remind myself that my fitness is there and I just have to carry through,” Cerrillos said.

Cerrillos, Pedroza and Salas will return at the Occidental Invitational at 11 a.m. Saturday in Eagle Rock.

After that meet comes the Redlands Last Chance Qualifier on May 15 and 16.

This meet is designed for athletes to reach the time needed to qualify for nationals.

The NCAA Division III National Championships will take place May 23-25 at the SPIRE Institute in Geneva, Ohio.