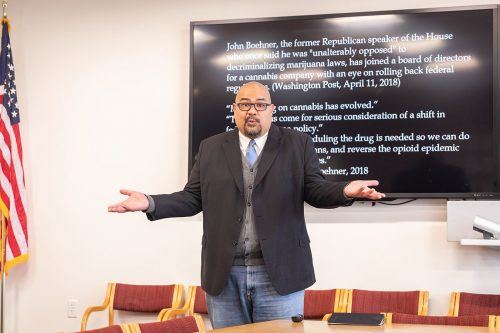 Ian Lising, associate dean of the College of Arts and Sciences, speaks about his book, “The Spin Doctrine: Communicating Belief, Truth and Fact,” Tuesday in the Howell Board Room. Lising discussed the societal impacts of spin-doctoring in regards to marijuana. / photo by Jaren Cyrus

Ian Lising, associate dean for the College of Arts and Sciences, reflected on the societal effects of spin doctoring as per his book published this year, “The Spin Doctrine: Communicating Belief, Truth and Fact,” during a talk Tuesday before students and faculty in the Howell Board Room.

Lising discussed one of the chapters, “The Madness of Harry J. Anslinger.” Lising said Anslinger, who served as the first commissioner of the U.S. Treasury Department’s Federal Bureau of Narcotics, was one of the most influential spin doctors in recent history.

“Most spin doctors, you’ll never hear of them because you’re not supposed to,” Lising said. “The best spin is to persuade someone to believe it was their idea.”

Lising said Anslinger sensed the end of prohibition and decided to tackle something else—marijuana.

“It was an absurd fallacy,” Lising said. “He…understood that this was not a harmful substance.”

Lising read a bigoted quote from Anslinger to show his siniter spin doctoring: “There are 100,000 total marijuana smokers in the U.S. and most are Negroes, Hispanics, Filipinos and entertainers. Their satanic music, jazz and swing result from marijuana usage. This marijuana causes white women to seek sexual relations with a Negro, entertainer, and any others.”

“This created a mass hysteria,” Lising said, adding that people became fearful of marijuana, and that fear spread far and fast, despite the reality that 29 of the 30 scientists Anslinger contacted to try to prove that cannabis should be feared found no evidence linking marijuana to violence or addiction.

Still, the immense impact Anslinger’s spin on cannabis had on society is felt today even as states have begun to legalize it.

“It was a culture shift,” Lising said. “Let’s talk about how many million people were put in jail because of this.”

Briana Villareal, junior sociology major who attended the lecture, said she was shocked at the power of Anslinger’s spin.

“I think it was and is still being used as an excuse to incarcerate people of color,” Villareal said.

“I think we’ve really entered a cultural environment where it might be irrefutable, but people choose to dispute it anyway,” said Sean Dillon, professor of theater.

Udit Gratz de Lang, an Amsterdam native who attended the lecture with her husband, music professor Reed Gratz, said growing up in the Netherlands gave her a different perspective on cannabis.

“As modern and as forward as Americans were, all of a sudden I bump into the culture and I think, ‘Oh, OK, you get arrested for years for just smoking a joint,’” Gratz de Lang said. “They are pre-rolled in Amsterdam. (This) is just very strange, culturally.”

Lising said that being aware and knowing how to differentiate belief, truth and fact is vital today.

“Spin doctoring can work the other way,” he said.

“If we do what is right, if we’re able to utilize information correctly, we can counter spin… If we learn how to look at what is factual and learn how to bring that fact out to the air and make people accept it, it becomes real,” Lising said.

“That to me is the whole point of all this.”