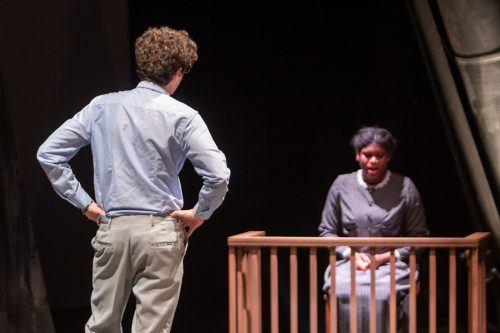 The play “Machinal” tells a story of heartbreak and despair as a young woman feels trapped, unable to free herself from people in her life that smother her with unwanted “love.”

The background set of the play was unique, there were four different sets that stayed on stage the whole time but moved, creating different scenes with each movement of the dark grey wood.

As soon as the actors came on stage the whole set was used, from high to low. With a cast of only eight, the stage was occupied to its full potential, using different scenes to create something similar to a movie. Every time the scene changed, words correlating to the setting were projected onto the background to inform the audience of what was happening, as well as how the main character, Helen Jones, played by sophomore theater and psychology major Shyonta Glothon, was feeling.

“Machinal” follows the tale of Helen’s unfortunate life. Her mother is old, alone and dominates their relationship. She leaves Helen voiceless, and consistently accuses Helen of being ungrateful for the life she has provided to her.

George H. Jones, played by sophomore broadcasting major Angela Romo, is the antagonist of the play. He is Helen’s boss and pressures her both to marry him and have his child. However, she does not love him, and physically cringes every time he touches her. He strikes fear in her and, ultimately, does not care that he does so.

“I loved playing the villain,” said Romo. “I put the most disgusting men that I have encountered or seen on film, or even in my own life, and I just turned it up to the fullest and I try to be the example of all the toxic masculinity that is in the world.”

Throughout the play, as Helen begins to feel more and more trapped, she starts having anxiety attacks that leave her unable to breathe. Every time she had an anxiety attack a clock would start to move, the colors of the stage would change and Helen would repeat herself. At the end of the play Helen manages to find her own freedom, but pays a high cost.

“The whole play is about her doing what everyone wants her to do, she goes to work for her mother, she gets paid for her mother, then she gets married and she is still told what she has to do,” said Glothon. “She is not free and that is all she wants to do; be free.”

The production of the play differed from the usual when, after three months of rehearsal, the original director left and a different director had to step in.

The two directors worked in different styles and it was a challenging transition, but working together as a team really helped the process, Glothon said.

“It was a long process and we had to be very adaptable, it was kind of an obstacle but I think a blessing at the same time because we got to grow with two different styles and I think, technically, the show was really good,” said Romo.

The play also breaks the fourth wall, meaning that one of the characters actually spoke to the audience, making the play more interactive and rare to witness.

“I thought the play was wonderful, visually appealing and I liked how the set moved in the back for every scene and the actors were very professional,” said Maya Saccardi, freshman business administration major.

The characters did a fine job at making the crowd feel their emotions to better understand the central message as they received a massive applause at the end of the production.

“The play left me in shock, with everything from the set, to the acting and then the message of the play,” said Pomona resident Claire Arredondo. “Everything felt so real.”

The message, being that woman have the power to be more than what is socially expected of them, was powerful and adequately portrayed.