By Katelyn Keeling, Stephanie Joseph on May 3, 2019 in News 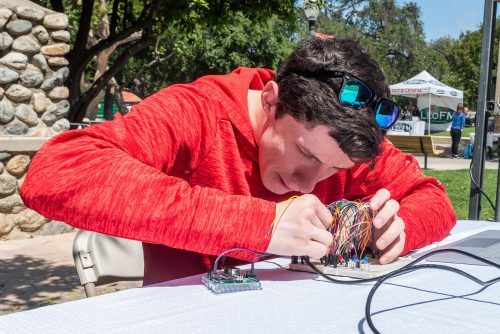 Sophomore computer science major Joseph Mueller puts the final touches on his police siren project Wednesday at the Mini Maker Fair in Sneaky Park. It has four light patterns that change as wires are moved into different connectors. / photo by Katelyn Keeling

The Makerspace and the librarians of the Wilson Library hosted the fourth annual Mini Maker Fair in Sneaky Park Wednesday.

The event featured students from a variety of disciplines and class standings, each displaying their creations ranging from robotics to arcade games.

Each person participating in the fair designed and built their project from start to finish. They produced everything, from the mechanics to the frame and structure.

“We have a simple siphon gear that is dumping water into our bucket and our water bucket is controlled by our server,” said freshman computer science major Marylou Juarez, who was demonstrating a water filter that she and her partner made.

The students occupied booths throughout the park to showcase their projects, discuss them and give demonstrations.

For some, the projects took a few hours, while others have been working on and perfecting their inventions throughout the semester.

The inspiration behind projects varied. Some were doing extra credit and others had the projects as a class assignment.

“We were just thinking of something fun and out of the ordinary,” said senior computer science major Brenden Matsuda, who helped Juarez make the water filter.

“We wanted to combine something a little more fun, and who doesn’t like a little water show?”

For most of the projects, students used 3D printers to create their models. The printer takes models they design or find and prints them in PLA plastic.

“There’s a specific website you go on, and you find a file on there and you see which one you want and connect it to the printer and it prints everything,” junior computer science major Abigail Kalin said.