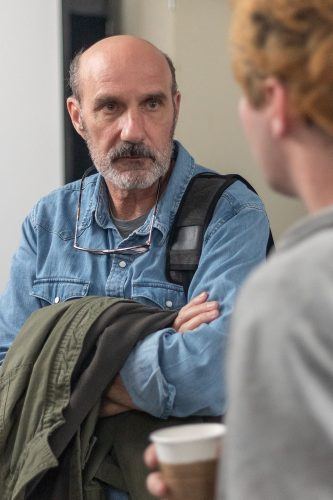 Mark Ludak, photographer, discusses his exhibit “Nomad” Monday in the Carlson Gallery during the opening reception. Ludak’s series, which was produced between 2010 and 2018, takes place in various locations of dense fog and dust produced by large bodies of water and sand to express the idea of individuals finding themselves in the present, where there is no past or future. / photo by Ariel Torres

Photographer Mark Ludak showcased his collection of photos titled “Nomad” at a reception Monday in the Carlson Gallery.

Around 15 people walked down the hallway to admire his project, which worked to challenge the idea of depth perception.

The collection of photographs aimed to represent the idea of a nomad, or a person with no permanent home. As there is little to no visibility of the background in each photo, the focus is solely on one object in each picture.

With the same beige color scheme throughout, the collection displayed the opposition in the nature of fog and dust.

Ludak said he was set on exploring the idea of space by capturing photos that did not have a visible horizon in order to challenge the idea of knowing where one is going and where one came from. With no set direction, he said that one becomes a nomad.

“It’s about individuals finding themselves in the present moment of where they are at,” Ludak said.

The most challenging part of the project was going through all of the film and trying to find photos that worked together, said Ludak.

The most interesting aspect was the way which Ludak took the color out of everything, leaving it to be almost white, said Dario Mariani, sophomore computer science major.

Mariani’s favorite image was a picture of the ocean that displayed no ending or beginning, showing just the water with fog behind it.

Mark Vasquez, sophomore kinesiology major, said he enjoyed the fact that although each photo displayed a different geographical location, Ludak was still able to convey the same mood throughout.

Zachariah Jolene, Fontana resident, was not as impressed with the work that was presented. He pointed out that only a few had merit.

“I like the style of a lot of them, he is very good at finding something to photograph, but I don’t know if he is very great at photographing that thing,” Jolene said.

Although Jolene was not easy to impress, his favorite photo was of a person rowing a boat out into the ocean with a heavily foggy background, and a lack of focus that made the subject just barely visible to the eye.

The proudest moment for Ludak, he said, was seeing the project come together, especially after taking eight years to create. Even though it is finished, Ludak said he struggles with finding a way to stop taking photos with similar characteristics of those placed in the exhibit.

“I had been thinking about the same thing for such a long period of time that so many of the issues that came up in the photographs, I still do,” Ludak said.

The exhibit will run through June 2.