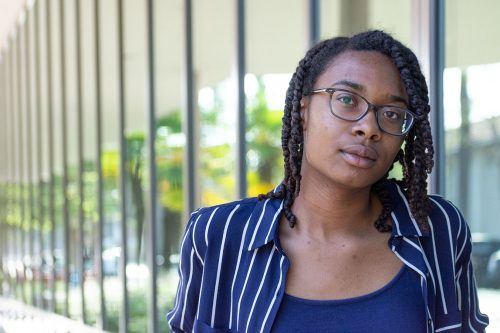 Sophomore English and Spanish major Dyamond Gray has been awarded the 2019-2020 Newman Civic Fellowship award for her involvement in the community. Students who receive the fellowship have access to many scholarship and networking opportunities. / photo by Kayla Salas

Growing up in Rialto, Dyamond Gray was exposed to different cultures and influences. Gray would see people ride their horses on the sidewalk as she looked out the window of the school bus.

“I enjoyed the diversity. There’s a lot of kind of cool cultural stuff in the city that you wouldn’t quite expect,” said Gray, sophomore English major and Spanish minor.

Gray was honored with the 2019-2020 Newman Civic Fellowship. It is a one-year fellowship for students who are committed to helping their community. They are paired with mentors who will work with them on their personal and professional development.

Gray said connecting and communicating with Spanish speakers in her community played a big role in her willingness to learn the language and pursue it as a career.

Gray’s main goal as vice president of the Language and Culture Club is to promote diversity and inclusivity.

“We’re focused on fostering relationships between culture and languages and bringing people together, bringing awareness of those things, celebrating them, partaking in them and learning how to respect them,” Gray said.

Gray spends a great amount of her time tutoring Spanish and English in the Academic Success Center.

“I support people, help guide them and find resources in order to help their student success in these two languages,” Gray said.

Gray said her impact on the world motivates her daily. She said she believes that her involvement in the community brings people joy and happiness.

Gray became fluent in the Spanish language during high school. After winning a Spanish poetry writing contest, Gray realized that language was a potential career path for her.

Gray said she feels language is a great way to learn about different cultures. She said her passion for language and culture sprung from where she grew up and from her teachers.

“I was blessed to have really great teachers who were all about making sure that I retained the materials,” Gray said.

Gray said she hopes to one day work in education as a Spanish translator, a school administrator or a teacher.

“I want to make sure that I’m providing people or I’m giving them the resources and I’m mobilizing them to educate themselves for change and to feel happy about where they came from,” Gray said.

Gray aspires to become polyglot, or someone who speaks four or more languages.

“I realized that what I speak can really influence others in positive ways,” Gray said.

Gray said that Ebony Williams, assistant director of the Academic Success Center, has been a role model for her. Williams encouraged Gray to apply for the Campus Compact’s Newman Civic Fellowship.

“She’s a fantastic student and I always enjoy working with her,” Williams said. “There’s always this little fear that she’s going to move on and leave me.”

“In addition to being well-spoken, Dyamond is also very observant,” Williams said.

Williams said Gray is interested in tackling many issues on campus and is strategic and active in solving them.

“She goes above and beyond when it comes to tutoring at the ASC,” Williams said. “She sometimes meets with them one-on-one beyond their session with her when they are struggling.”

Ann Hills, associate professor of Spanish, said Gray is the model of an activist student.

“Dyamond is very personable and down to earth,” Hills said. “She’s very talented and modest at the same time. She’s got this intellectual curiosity that can be very rare today.”

“Dyamond is a leader. She is confident and passionate and is not afraid to be honest. She will give her opinion unapologetically,” Garcia said. “She takes the necessary steps to get things done but at no expense to her artistic talents.”

“She is an amazing individual in our club, Language and Culture, and language cohort would not be the same without her,” Garcia added.