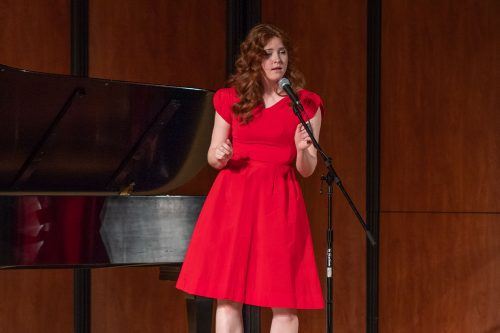 Catherine Tereszczuk, junior music major, performs “Honeysuckle Rose” during the “Best of La Verne” year-end showcase of Sundays at the Morgan on May 5 in the Morgan Auditorium. The monthly performance allows students, faculty and members of the community to showcase their musical talent. This being the last show of the year, the musicians ranged from students to faculty. / photo by Jaysin Brandt

The best of the best performed a variety of music, showcasing different styles of vocals and various instrumentalists at the annual Best of La Verne performance on Sunday.

The Salsa and Latin Jazz Band, consisted of vocals, percussion and brass instruments; it was the perfect start to the two-hour performance. The band performed covers of “Lo que va a pasar” by Chucho Valdés and “Plastico” by Rubén Blades.

The percussion and brass instruments echoed throughout the auditorium.

Beck Barton, junior music major sang with the Salsa and Latin Jazz Band, said the performers were asked by the music faculty to perform, and could not deny this amazing opportunity.

“There’s a lot of energy that we just kind of connect with each other, and it’s a lot of fun watching each of us interact with one another,” Barton said.

Barton said that the music they performed this semester was rooted in the Cuban and Latin culture.

The final performance of the night was a Mexican mariachi performance that had the audience clapping along.

Tereszczuk sang with an old jazz voice that sounded like something out of a 1920s performance.

Tereszczuk said that performing in the “Best of La Verne” show was nerve-wracking, but loved that she could go on stage and have fun.

“Once I’m up there though, it just all goes away, and I can be present in the moment,” Tereszczuk said. “It becomes fun at that point.”

Tereszczuk said she was nominated to sing a solo musical theater piece but denied the offer to collaborate with Gratz.

“I thought it would be a really cool opportunity to sing a jazz piece because I know Reed Gratz is a great jazz pianist,” Tereszczuk said.

Rios performed a solo violin piece that exuded serenity. Any chatter in the audience died down when Rios confidently and expertly played his violin.

“I really liked the solo violinist a lot,” Garcia said. “Anyone who can master that is someone who is talented.”

Parker and Nam worked well together in their rendition of “You Should be Loved” by Bill Russell. Parker wore his heart on his sleeve as he sang and emoted the song.

Garcia said that while the violin performances have a special place in her heart, she enjoyed every performance.

Victoria Sanchez, sophomore kinesiology major, said that she particularly loved all of the opera singers.

Kate Correnti, freshman music major, projected her operatic voice without a microphone during her performance of “Gretchen am Spinnrade,” by Franz Schubert. Nam also played piano with Correnti.

“I know how hard that is to do so it’s really cool to hear that so many people have that talent,” Sanchez said.