By Joey Matsuzawa, Katelyn Keeling on May 10, 2019 in Sports, Water Polo 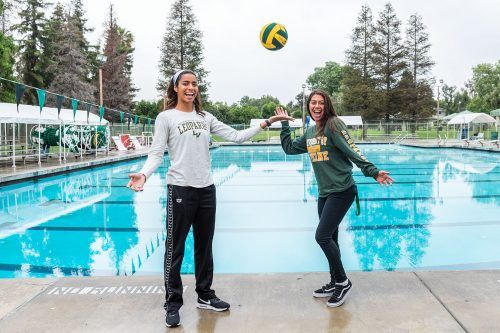 After finishing last season in seventh place in the Southern California Intercollegiate Athletic Conference with a 5-9 record, the women’s water polo team defied all odds this season finishing with a 9-5 record that got them into the postseason.

While the team’s season ended in defeat in the SCIAC Tournament at the hands of rival Pomona-Pitzer, the women made strides in building a team that can compete at the top for years to come, with two players leading the charge – senior attacker Guarina Garcia and sophomore attacker Jassmine Kezman.

After dropping the first three games with their first conference win coming four weeks into the season, even with the return of the two-time First Team All-SCIAC athlete in Garcia, the future of the women’s water polo team looked to be bleak.

“In the beginning we didn’t really know how each other played,” Kezman said. “We came from different schools and had a lot of transfers but we slowly learned each other’s tendencies.”

Sitting at a 3-8 overall record, the team’s sparks would ignite following a highly contested 13-12 loss against Cal Lutheran, the team that would go on to win the SCIAC tournament.

“At the beginning we didn’t really think that we would be able to (make it to the tournament), myself included,” Garcia said. “But once we started winning we started believing we’re really in this.”

The Leopards would then go on a five game winning streak against SCIAC opponents, a push that would lead them into the postseason.

“Once we believed that we had the potential to grow as a team we knew that we could contribute that to the win.” Kezman said.

Kezman would go on to lead SCIAC with 81 goals and 91 points – the next highest goal scorer in the conference had 54.

Garcia spearheaded her own scoring campaign, with the Puerto Rico native notching top-10 stats with 52 goals, 62 points and 40 steals.

Both athletes would go on to earn First Team All-SCIAC honors for the third time in both of their careers as Leopards.

Kezman recalled that Garcia was one of the main reasons she chose to play for La Verne while she was still in high school.

“When I was a senior in high school she actually helped recruit me,” Kezman said. “And then she left.”

“I remember that, I went to so many games to watch her play, trying to get her to come,” Garcia said. “But things ended up being different and I had to leave.”

After her one year stint playing for San Jose State, Garcia says that she is happy she was able to come back and make a difference.

“I was never really an upperclassmen here at La Verne and it was always like I was the baby on the team,” Garcia said. “But then coming back I knew the program, I felt comfortable, like I know how to represent La Verne. Toward the beginning I was still struggling with getting used to coming back and once I started sharing more time with the team it became so much fun.”

Though with the multiple accolades both athletes have to their name it could be easy to become complacent, but both girls take the pressure of leadership in stride.

“I think that we’re kinda just used to playing water polo, it’s like muscle memory for us at this point because we started so young and have been playing since,” Kezman said.

Kezman started playing club water polo at 8 when she joined the Commerce Aquatic Center’s team. She played throughout high school, where she was then recruited for La Verne.

Garcia started playing when she was 9, playing throughout high school in Puerto Rico, before joining the Puerto Rican National Team when she was 17 and has played with the team ever since.

“Every summer I go back and train with them and then whatever tournament they have I go play with them,” Garcia said.

Garcia is not the only one with national plans. Kezman recently received an invitation to tryout for the USA National Team through head coach Pat Beemer.

“Beemer actually set this up, he recommended me to someone and I got an email for USA water polo to try out for the national team,” Kezman said. “It’s just a two day try out, I have no clue if I’ll make it but I’m still training and I’m still getting in the water almost every day,”

Looking forward into the near future, Garcia plans to focus on her school work in getting a master’s degree in athletic training, while Kezman looks to continue coaching for Rose Bowl Aquatics in Pasadena.

“In the summer I still plan to coach and coaching helps me see things as a player because I’m able to visualize it better,” Kezman said.

Although the Leopards fell to the Sagehens in the semifinal, the players helped turn the program on its head, going from a seventh place season last year to a playoff appearance this season with few regrets.

“My only regret is that I wish Guara came sooner,” Kezman said. “I’m grateful that I was able to come back and was given the opportunity to join the team again,” Garcia said.