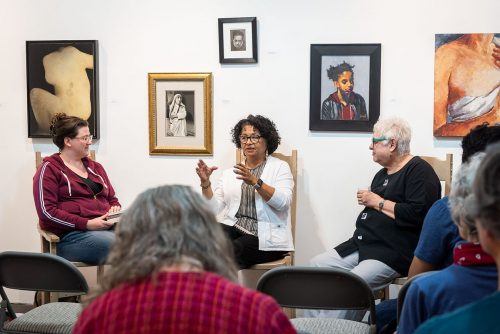 Curator Christine Lee Smith discusses “Female Artists: Past and Present” with artists Marina Diaz and Jacqueline Knell, as part of the Inland Empire Museum of Art’s monthly art talk Saturday. Diaz’s art piece titled “Pam” and Knell’s “Seventeen” were both featured in the show’s exhibit. The IEMA is in Upland at 1334 N. Benson Ave., Suite D. / photo by Katelyn Keeling

The Inland Empire Museum of Art hosted an art show and discussion panel titled “Female Artists: Past and Present” as a part of the museum’s monthly Art Talks.

Curated by Christine Lee Smith, visual arts major at Azusa Pacific University, the show featured the works of female artists over the course of a century, including photography and paintings, all archived in the collections of the museum.

Smith picked the art pieces to be featured in the show to further explore themes of femininity.

“This past year and a half I had been examining femininity, what it means to be a woman and what that looks like,” Smith said.

Smith said she found that there was a diversity in the medium used by women artists, which became evident through the artwork that panelists Marina Diaz and Jacqueline Knell create.

“There’s this tendency to assume that early women were using a lot of textiles, because there was a limitation,” Smith said. “I was fascinated by (Diaz and Knell’s) work. I knew they would balance each other well and wanted people who could make room for one another.”

During the discussion portion of the art show, Diaz and Knell shared many of the influences that brought them to become the artists they are today.

“I started to recognize I was an artist but hadn’t done anything yet,” Diaz said, recollecting her time as a child in the first grade. “When people would ask I said I was a painter, but hadn’t painted yet.”

Diaz later studied advertising and fine art drawing and painting at the Art Center College of Design in Pasadena, making note of the 75% male student population of her school.

“In society we are pitted against each other and we don’t even know it yet, what we’re doing right now is breaking through a clearing,” Diaz said.

Although she is a woman artist, Diaz said she felt her work was not defined by the constructs of gender, but rather cultural constructs.

“Growing up, skin tones weren’t positive things. I was always asked about my color,” Diaz said. “Color resonates with everyone and makes us all the same. I want you to see less of what they look like and more of what it feels like.”

In Diaz’s artwork, it is evident to understand what she means.

Her art is a canvas of bright pastels or paints, all colors complementing one another to form figurative and abstract work.

Diaz refers to her process as “sculpting,” working with both hands and letting herself get lost in what she is creating.

“It’s quite magical,” Diaz said. “What drives me is I have something to give someone.”

Knell has been painting since 2007 and primarily creates city scenes and works with live, sitting models.

“(Art) was in my family,” Knell said. “My father was an architect and probably would’ve been an artist if it was a practical thing during the Depression.”

Contrary to how art always played an active role in Diaz’s life, Knell shared that her consistency of painting was erratic and not focused.

“The most creative things were in the kitchen,” Knell said, scratching the surface of a much bigger narrative of the stereotypical role women played in society.

What surprised both women about the kind of art women make was that, at first glance, it is genderless.

“I can walk in here and think men did this, too or that it wasn’t a gender-based exhibit,” Knell said. “The fact is it’s a wide ranging exhibit and that’s what’s wonderful. It’s wonderful that so many women can do so many wonderful things. That’s the bottom line.”

Diaz said there are a lot of women artists today, but that they have just not been acknowledged yet.

“It’s now time for us to move forward and push those doors open for us,” Diaz said.

Smith acknowledged there is a cultural cost to a lack of exposure for people to represent their artwork.

Knell said that the cost is society isn’t functioning to their full potential.

“If anyone is stopped from doing what they do well, there’s less that has been contributed to the world,” Knell said. “We don’t know what we’re missing if something isn’t there.”

“Female Artists: Past and Present” served as a platform to further discuss the barriers artists face in their creative journey, but specifically the conversation of gender.

“I started the museum because there was a need in the area,” Gene Sasse said, owner of the museum and professor at Riverside City College.

Sasse decides on the topic of each Art Talk. These discussions are intended to inform, educate and engage art show attendees.

Art Talks are the third Saturday of every month from 6 p.m. to 8 p.m.

The next show is titled “Art Theater for the Mind” and the art can be viewed on June 2.

The IEMA regularly displays work that has been donated to the museum.