By Danielle De Luna, David Gonzalez on September 20, 2019 in News 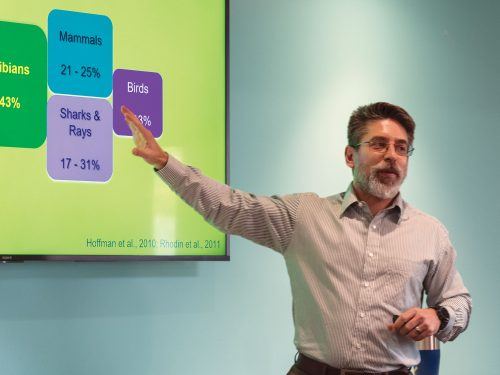 David Brickford, associate professor of biology, discusses why he studies amphibians that are leading the march toward mass extinction Tuesday in the Executive Dining Room. Brickford shed light on why the rate of extinction has changed dramatically. / photo by Danielle De Luna

The two questions Bickford set out to answer were the kinds of amphibian species in Southern California and what kind of stream features were associated with the California newt egg clutches.

In Southern California, the three endangered frog species are the Arroyo toad, the yellow-legged frog and the California red-legged frog, Bickford said.

He said that he has never seen any of the three species. Along with the endangered amphibians, the California newt is labeled as a “species of special concern,” he said.

While studying amphibian egg clutches, it was found that more water is preferred and connectivity is limited, Bickford said.

He noted that the effects of drought on amphibians needs to be further explored.

Bickford said his findings are currently not ready for publication.

Bickford said that he studies amphibians because they are leading the march toward mass extinction and are one of the groups most at risk.

He said that there have been over 200 amphibian species to go extinct, 43 percent of all populations are declining and 32 percent of the species are threatened with extinction, Bickford said.

Amphibians are used to look at the toxic thresholds of lakes and streams, and are treated like a canary in a coal mine, Bickford said.

“Before mass extinction events were defined by incredible volcanism and climate change brought about by impact, like a meteor,” Bickford said. “[Humans] are the driver now.”

Bickford said that the main drivers for the decline and extinction of amphibians include habitat loss, pollution, over-harvesting, invasive species and diseases and climate change.

These drivers lead to a loss of biodiversity, which is a bigger problem than climate change, Bickford said.

“This has culminated in what people are starting to talk about a new geological Anthropocene, named after humans, and the kinds of things we are leaving behind not only with geological record but also the fact that are starting this mass extinction,” Bickford said.

Jay Jones, professor of biology and biochemistry, said that amphibians can be the indicators said. “We are virtually eliminating countless species.”

Paul Alvarez, professor of kinesiology, said that he would hike in Marshall Canyon, and enjoyed learning about the species in the trail.

Chris Perez, junior criminology major, said it was interesting to learn about the human caused factors of the decline of amphibians.

“Professor Bickford said that these factors multiply with one another, so the way that I interpret that is these factors are greater and synergize together,” Perez said.