By Andrew Alonzo, Ariel Torres on September 27, 2019 in Soccer, Sports 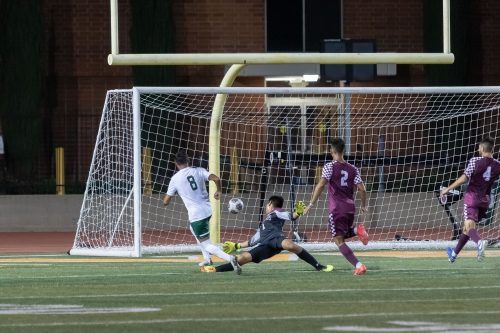 Leopard junior forward Jovanni Garcia shoots the ball past Bulldog goalkeeper Noah Natividad for the go ahead goal in La Verne’s game against Redlands Wednesday night. However, this was the first and last goal for the Leopards, as costly mistakes resulted in a 3-1 loss to the Bulldogs. Now 1-1 in conference, the team prepares to travel on the road to take on Chapman and Caltech. / photo by Ariel Torres

The La Verne Leopards played the Redlands Bulldogs in the second competitive match for the Southern California Intercollegiate Athletic Conference on Wednesday night. The Leopards defense played hard but mistakes saw them lose 3-1 to the Bulldogs.

The Leopards kicked off but did not find success in their first attack. The first half was a class of defenses as both sides looked to score right out the gates.

The Bulldogs began the game with caution, not taking risks with their possession and playing safe passes to one other. The link-up between the defense and midfield was established early on for the Bulldogs and the Leopards found it difficult to regain the ball.

“We had a game plan to defend and counter attack,” sophomore defender Ethan Diaz said. “Trevor wanted us to keep our mentality and to play for each other to get the result.”

The early pressure from the Bulldogs was easily gobbled up by the Leopards defense including a chance from Redlands freshman midfielder Joseph Parra that fell apart after a high line from the Leopards caught Parra offsides.

Junior defenders Tyler Avila and Ricardo McGary were the standout defenders for the Leopards in the first half.

The fullback duo severely put a stop to Redlands’ attacking threat while also creating offensive pressure from the back for their own team.

“Our mentality was just being solid defensively and try to get the ball to our forwards to try and score,” McGary said.

In order to alleviate the Bulldog’s pressure, the Leopards began to play long balls to clear their defensive lines. As the game went on, the Bulldogs became more dangerous with each play, forcing either a defensive clearance by the center backs or a save from sophomore goalkeeper Kevan Rehmani.

“They constantly shifted players in the first half and played balls in that I could easily come out and get,” Rehmani said.

Rehmani would finish the game with five saves on eight shots on goal.

A Bulldog miscue in the La Verne defensive half turned into a Leopards opportunity to go ahead.

The Leopards pounced on a miscontrolled ball from the Bulldog’s attack and the defense was able to spring junior forward Jovanni Garcia free for the counter attack.

Garcia got in behind to split the two Bulldog center backs and carved a beautiful angle for himself on the top of the penalty box. Garcia set himself softly on his left foot before driving a delicious, curling effort past the Redlands keeper to give the Leopards a 1-0 advantage 30 minutes in.

“We have a five-minute rule where we don’t mess around with the ball and we just get it up and out of our defense,” said head coach Trevor Persson. “Because goals always happen within five minutes.”

The Bulldogs matched the Leopards intensity by playing even more possessive and aggressively to force a chance. The pressure got to La Verne and a sloppy mistimed challenge by the defense inside the box cost a penalty kick. Redlands junior midfielder Derrin Valeri was able to tie the game from the spot 1-1.

Despite spells of possession for La Verne, they were never able to establish their attacking prowess.

Intricate passing from the Bulldogs made the game difficult for the Leopards.

The first half ended with both teams seeming to have answers for each other’s offensive pressure.

The second half picked up where the first left off as the Bulldogs quickly established their possessive play style. However, the Leopard defense absorbed the aggression like a sponge in the opening minutes of the half.

“They never really penetrated our defense,” said Diaz. “Their goals were just our mistakes that they happened to capitalize on.”

Bulldogs sophomore midfielder Avery Jacobson tried to get things started early in the second half with a 22-yard screamer that just barely whiffed over the top of the Leopard crossbar.

The stadium held its collective breath as the shot flew by. Sighs of relief and frustration from both sets of fans echoed throughout the field.

The Leopards struggled to find their offensive transition while Jacobson and freshman forward Ethan Kovach thrived in the middle of the field for Redlands. The duo kept the tempo of the game high, dominating the traffic and pressure for the Bulldogs which eventually sculpted an opportunity.

Redlands’ pressure from the midfield lead to a slick through ball to Kovach that just went beyond the flying foot of Diaz.

The ball slid into the path of Kovach who delivered it into the ULV net. Rehmani was unable to react fast enough to the shot and the Leopards found themselves behind 2-1.

The Leopards kept calm defensively following the goal but still could not find their feet on offense.

Frustration soon set in for the Leopards and a tackle a few yards out of the penalty box helped set up the Bulldogs’ third goal of the game.

The near post delivery pinballed around inside the penalty box but with too much traffic involved, the ball was directed into the Leopard net and the Bulldogs were gifted their third goal of the game.

“At times we had ourselves organized for our offensive pushes,” said Persson. “Unfortunately the chances didn’t fall our way today,”

While chances came for the Leopards, the offense could not convert those chances into scores.

The Leopards greatest opportunity came from a deep cross from Avila to junior forward Johnny DeRueda, whose header just barely zoomed over the Bulldog crossbar.

“It sets us up for the next game,” Persson said. “Every opponent is the same, it’s just how we finish our opportunities and I know we’ll be ready for Saturday.”

The Leopards are back in action 7 p.m. Saturday at Chapman.