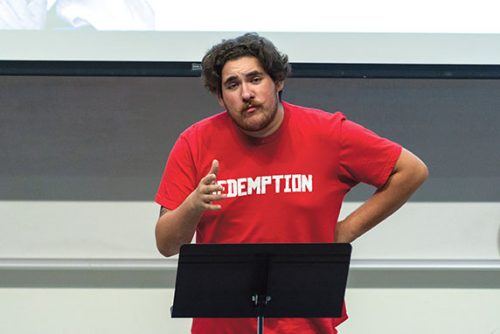 Colin Coppock, sophomore political science major and debate team member, argues that it is not the U.S. Constitution that has failed the Latinx community, but rather government officials during the first public debate of the year Tuesday in LaFetra Auditorium. / photo by Veronyca Norcia

Roughly 30 people attended the first public debate of the year that asked “Has the U.S. Constitution failed the Latinx Community?” Tuesday in LaFetra Auditorium.

In honor of National Hispanic Heritage Month, the debate featured perspectives from the governing side who pointed the finger at a faulty constitution while the opposition put the blame on the leaders whose job it is to enforce the rights and values of the Constitution.

The debate was opened by senior rhetoric major Farez Abdullah by calling out the eerie silence of the Constitution toward the Latinx community.

“It is silent in a way a sanctuary city is,” Abdullah said. “It may not give your information to ICE, but when ICE comes to your door, your city will not protect you.”

Abdullah elaborated on how the United States has weaponized the dialect of its citizens. He speaks on how children are not being taught Spanish as a means to protect themselves at school and in public.

“We say that language has been something that’s been used against the Latinx community; either as a form of intimidation or assimilation,” Abdullah said.

Though the opposition agreed that the Constitution lacked sustenance, senior rhetoric major Colin Coppock delivered that the true fault lies with the leaders and government officials who are supposed to uphold the constitution.

Coppock compared Los Angeles’ Latinx community representation to that in the state of Iowa.

He said it is in these regions more Latinx communities should have representation because they are living in a society that is built around the success of another dominant community.

“We believe that when there is actual interaction with members of the Latinx community and the constitution, on equal grounds, that it’ll lead to better means in the future,” Coppock said.

The floor shifted back to the governing body where junior biology major Damian Juardo hammered home the point: America is a diverse place with many diverse opinions and values.

In reality, however, Juardo argued the Latinx community is nudged into conformity.

Juardo’s words echoed through the room as he talked on conformity, believing that if the Latinx community does not conform, then their rights are hidden away during due process.

It is the job of the community to use their rights, bring about change and to better live their lives.

Ruedas said the Latinx community needs to exercise their rights in order to make the necessary changes they want.

“We’re showing that the Constitution has benefited the Latinx community because they are able to use their powers,” said Ruedas. “It’s only those in power that interpret it differently, and that’s what we need to change.”

As Christian Nunez, a senior rhetoric major, closed arguments for the opposition, citing the Latinx community’s lack of knowledge of their constitutional rights.

“The knowledge and understanding of what we are entitled to, is what guarantees us the ability to reach a type of engagement in our politics,” Nunez said.

Moreover, Nunez reiterates how the interpreters of the constitution have failed to properly inform the Latinx community of their rights granted to them by the Constitution.

Nunez discussed further it has been this fault in the system that prevents Latinx communities, or other groups in general, from engaging and participating in politics.

Nunez developed his idea of the ever-changing document. The Constitution that we uphold today is not being interpreted the same way as it was back when it was first written.

“It is important to understand the powers the government gives us,” Nunez said. “It is better to understand that we do have powers, yet someone is denying us that power.”

With National Hispanic Heritage Month just beginning, debate coach Robert Ruiz said he hopes those who attended have become more aware and informed of the arguments regarding the Latinx community and U.S. government.