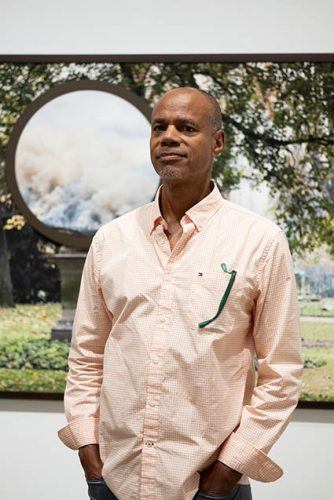 Todd Gray, a Los Angles-based artist described the reasons behind his exhibit “Euclidean Gris Gris,” Saturday at the Pomona College Museum of Arts.

Featuring many pieces critiquing colonialism, the works also focuses on the word “euclidean,” meaning geometrical, something seen accurately portrayed once looking through the exhibit.

“The exhibit was an allusion to violence committed against people of color,” said Gray. “I feel like I’m in control because we are all authors of our thoughts.”

His photography was laid out in different types of frames – some sleek, some textured, some round and some squared, with many overlapping.

This overlay of frames seemed to create multiple dimensions within the different photographs, clashing different iconography from different points in history.

“There is an interesting juxtaposition of nature and artifice and super effective comparisons between autonomous objects and a single image or thought,” said Anita Enriquez, a Los Angeles sculptor, video and performance artist.

The pieces were not to be considered a collage because the frames created a clear barricade between images, one clearly juxtaposing the other in many instances, having no common ground aside from being complete opposites.

“I thought there was a lot of tension in the images because of the tension between killing beauty and catastrophe or identity and obscurity,” said Alan Tollefson, University of La Verne theater technical director.

Some of the round frames depicted universes placed over demolished or gloomy environments that made the pieces come across as though they were thought bubbles, almost like there could have been more positive alternatives to the ruins being shown.

Alternatives that would have been brighter than the ruins that were left, similar to the stars in the universe shrouded among darkness in the frame above the piece.

“The frames were very connected to creating categories,” said Nana Adusei-Poku, curator of the exhibit.

One installation in particular was a composition of two frames; the sleek frame beneath had a picture of the hedges in the garden at the Palace of Versailles.

The piece was angled in such a way that the corner of the hedge was centered.

Above the crease that the hedge created in the middle laid a statue depicting an agonized woman on one side, with another more nonchalant woman on the other.

“There seemed to be a theme that some products of wealth were derived from other places in the world through exploitation and that sort of thing,” Tollefson said.

As the two women were separated by the corner of the hedge, it provided a juxtaposition of two classes of people – those who had the luxury to lay around and those who could not afford to.

The woman in agony appears to be portrayed as a person of color, illustrating the race relations during that era in history.

“The pieces look like they’re maybe trying to say something,” said Kye Shi, a Harvey Mudd student. “Art is what you want it to be, though there may be people who try to preach something through it.”

The exhibit will run through May 17 at the Pomona College Museum of Art.