By Campus Times Editorial Board, Danielle De Luna on September 13, 2019 in Editorials, Opinions 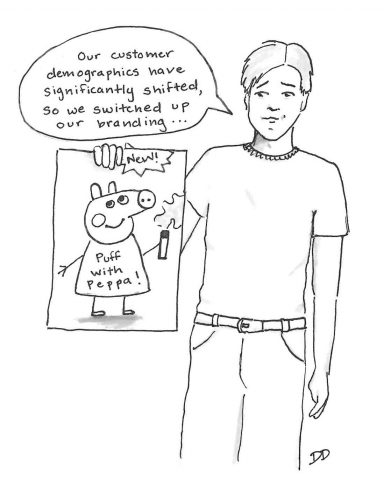 The Trump administration announced Wednesday that the Food and Drug Administration is developing a plan to clear the market of flavored e-cigarettes; a federal policy that is long overdue in working to protect minors from negative health effects.

U.S. health officials are investigating what might be causing hundreds of serious breathing illnesses in people who use e-cigarettes and other vaping devices. They have identified about 450 possible cases in 33 states, including six deaths, according to the Associated Press.

The rise in vaping has lost its intended purpose of serving as a way to yield heavy smokers off of cigarettes. It has now found its way in the hands of minors who are worsening their health and increasing their addiction.

Many health risks are glossed over because companies choose to focus on the relative harmlessness of vaping when compared to the danger of traditional tobacco products. However, consumer health should take precedence over marketing to boost sales, especially when children are involved.

This follows Michigan Governor Gretchen Whitmer’s use of executive power Sept. 4 to impose a six-month ban on the sale of flavored e-cigarette products and misleading marketing associated with vapor products. These emergency rules made Michigan the first state to take a strong stand to protect children from the harmful effects of vaping.

Michigan’s ban will take effect with the implementation of emergency rules and will prohibit the sale of flavored vapor and alternative nicotine products as well as marketing that could propagate false beliefs about said products, according to the Michigan Department of Health and Human Services.

This ban was a well exercised executive action, given the significant threat vaping poses for minors who begin partaking at an early age. The Center of Disease Control Morbidity and Mortality Weekly Report found that e-cigarette advertising reaches 7 in 10 teens.

Often advertising fails to communicate the health effects of vaping, while highlighting the variety of flavors available to customers who are looking for an alternative to smoking traditional tobacco products.

Although e-cigarettes are moderately effective in helping people quit smoking, they cause more mouth and throat irritation than nicotine replacement therapy, according to a study from the New England Journal of Medicine. The FDA needs to create policy that does not create a black market for vape products, but instead reduces risk of harm. In addition, the federal government needs to work harder to prioritize proactive policies that will protect public health before the negative effects are all too apparent to ignore.