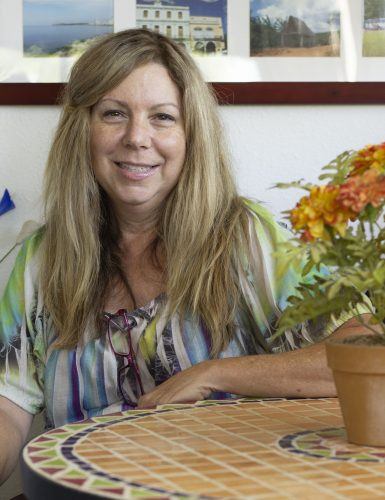 Ann Hills, assosciate professor of Spanish and chairwoman of modern languages, has two passions: teaching and karate. Outside of ULV, Hills is also a certified karate instructor with a third-degree black belt. Hills says that she applies lessons from karate to her job as professor. / photo by Melody Blazauskas

Ann Hills, associate professor of Spanish and chairwoman of modern languages, has a kind demeanor – but rest assured you will want to stay on this third-degree black belt’s good side.

Yes, you read that correctly: Hills is a certified karate instructor in the San Fernando Valley who is capable of bringing down a 200-lb. man.

At 21 Hills became involved in karate because she and a friend wanted to explore other types of activity. As she pursued karate, she could not find a reason to stop. And as Hills continued on, she saw more values of karate influencing her life.

“It’s certainly taught me that there’s a connection between mind and body, and it’s affected other areas in my life like my diet and my mindset,” Hills said.

Gradually, Hills moved up the belts and began teaching others karate.

The mental and physical balance of karate has played an essential role for Hills, and she believes that others should have such an outlet.

Hills appreciates karate because it de-emphasizes some of the competitive aspects of sports. Essentially, we should worry about our brains over own brawn, she said.

“There may be people who may do better in an enclosed environment like karate,” Hills said. “Karate’s about making progress but at your own pace.”

Hills eventually achieved her black belt and is still a karate instructor outside of ULV.

Hills explained that through karate, she has been able to continually learn more about herself and apply some of the same lessons to her courses at here.

“I think the same principles that I teach here are important over there,” Hills said. “I think it coincides with the University policy of lifelong learning in that you continue to learn about yourself.”

During her college years, she began to take more English and Spanish courses as she came to realize her calling in life – to teach.

“I thought this (teaching) is something I want to do,” Hills said. “I could take my love of literature and Spanish and put them together.”

Though her two passions –teaching and karate – may get overlapped sometimes, Hills still finds a way to make time for her students or strangers.

No matter what class session you are in, Hills realizes that students are still learning. Hills wants her classroom environment to promote curiosity and interaction among students.

“She’s really engaged with us during class and animated,” said junior Spanish major Litzy Munoz. “Her passion for teaching is something I really admire about her.”

Moreover, Hills wants her students to be in tune with the world around them and how each class plays a role in their lives.

“Professor Hills wants what’s best for her students,” said sophomore psychology major Evamarie Vilche. “She helps us with whatever we’re struggling with because she truly wants all of us to succeed.”

Hills is similarly attentive and supportive with the faculty in her department.

“She knows how to engage and listen to the faculty first to best address our concerns,” Lev-Da-Silva said. “She’s always been very supportive of the department. She wants us and the students to be involved, and if there’s an issue she’s there to help in any way she can.”

While some of us do not know what our calling is, Hills has been in front of hers all her life. From instructing stuffed animals to beginning karate participants, Hills’ imagination would guide her in a unique reality.

“As a kid I remember I used to line up all my stuffed animals like a kindergarten class and read to them while showing them the pictures in the books,” Hills said.

Her passion and imagination is still there today in Miller 203, where her office has a tightly packed bookshelf with colorful knick knacks and comfy cushioned white chairs.