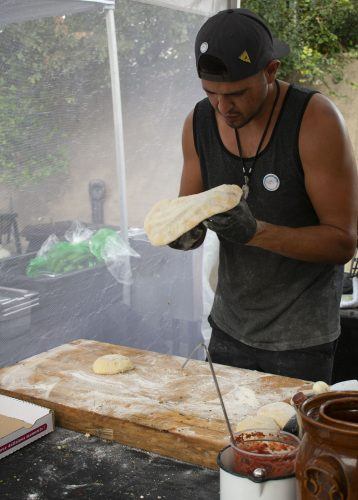 Old Stump Brewery Company in Pomona hosted a Vegan Kickback on Sunday with more than 10 vendors who provided food and apparel for sale.

The event offered vegans and non-vegan an opportunity to try a variety of vegan fare – including some unexpected options such as pizza, sushi, tamales and tacos.

An Amaro Pizzeria is a vegan pizza company created by Justin Amaro, who wanted to change his life and became vegan.

Amaro has created a variety of vegan pizzas such as the Italian sausage alfredo, pepperoni, mac and cheese, roasted garlic diablo and the eclipse.

He does not have an actual restaurant yet, but Amaro attends many vegan food festivals and pop ups around Southern California.

“Any type of food does not have to have animal products in it to be good,” Garcia said. “He (Amaro) has the wood burning ovens in there that provides the pizza with its own authentic taste.”

Jades Vegan Sushi owner Stephany Gonzales provided customers with a bit of a twist by using brown rice, a hint of Mexican culture and a lot of sauce.

Gonzales changed to the vegan lifestyle after learning about the mistreatment of animals through the process of becoming food.

She said she enjoys sushi so later learned how to create vegan sushi rolls that led her to create her own vending and catering business.

“It is really hard being a foodie, and thinking I am so limited,” Gonzales said. “I started as a vegetarian for the first two years but when I started cooking I saw that there is a lot of really good food I could make.”

Veganos Locos is an apparel company owned by Tristian Vargas and his wife Reyna Vargas.

Some of the profit they make goes toward an animal they are supporting at a farm sanctuary.

The animal they are supporting this month is a duck named Jemima Puddleduck at the Gentle Barn and about 10% of the profit will go toward supporting Jemima.

“My son asked me to support animals from farm sanctuaries,” Tristian Vargas said.

His son chooses an animal and Jemima Puddleduck is just the second animal they are supporting.