By Jacob Barriga, Nathan Hua on September 20, 2019 in Soccer, Sports 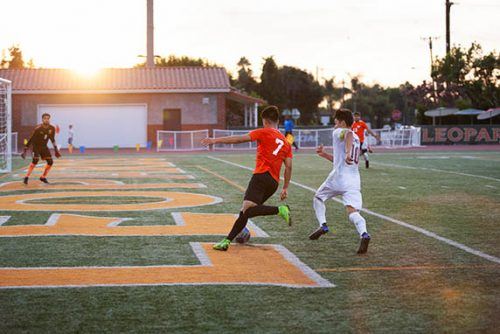 Leopard junior forward James Coe centers the ball toward his teammate, junior midfielder Ryan Mendoza, for a chance to score on the Sagehens. La Verne would win the game over Pomona-Pitzer, 1-0, Sunday. The Leopards will travel to St. Katherine on Monday. / photo by Nathan Hua

The men’s soccer team ended their pre-conference play with a strong 3-0 win against the Whitworth Pirates on Sunday night.

This was the team’s first game since dropping two games back-to-back during their trip to Oregon where they lost to George Fox and Pacific.

Whitworth began the game by applying heavy pressure to La Verne, as the majority of the first-half was played on the Leopard’s side of the field.

However, the Leopards, playing defensively, put themselves in position to score multiple times with break-away opportunities including three consecutive shots in the 31st minute.

Junior forward Jovanni Garcia broke away from his defender as the lead pass from junior forward James Coe set Garcia up for an open shot that would be deflected by Pirate goalkeeper Jesus Nunez.

Coe got the rebound and line himself up for another shot which would be stuffed by a Whitworth defender.

Junior midfielder Daniel Ortega was able to gather the deflection and dribble the ball back into the box and after sidestepping a defender, Ortega got another shot off for the Leopards but Nunez held on to this one.

Awarded a free kick in the final minutes of the first half, Pirate midfielder Britton Clifford, would head the ball off of the cross bar and back into the arms of goalkeeper Kevan Rehmani.

The defensive first half ended in a 0-0 tie.

The Leopards would break through first as Garcia, receiving a lead pass from the defense, was able to get past his defender into the middle of the field. With only the keeper to beat Garcia snuck his shot into the left corner of the net to put the Leopards up by one in the 52nd minute.

In stride, Garcia got behind his defender and from the top of the box, sent a strike into the top right corner of the goal to extend the Leopards’ advantage to two.

“We have trust in everyone, and I saw him open [..] I knew Jovanni was going to finish the play,” Coe said.

The Pirates began to press the stiff Leopard defense.

Whitworth began to take multiple shots from outside the box including a 30-yard strike from junior defender Scott Penner that Rehmani would save.

The Leopards would put the nail in the coffin late in the game when a 50-50 ball forced Nunez away from the Pirate box only to be beat by senior midfielder Cesar Rodriguez as he tapped in the third and final goal, lifting the Leopards to the victory and improving their record to 4-2 heading into conference play.

“It was a well-balanced performance. [..] We play a defensive game; we want to force them to try and penetrate our lines and we are better one on one with who we believe are the three best offensive players in conference,” Persson said.

Garcia and Rehmani are confident about the Leopards’ chances going into conference play next week.

“It’s a great feeling to get this win going into conference play, I feel we have the potential to be on top if we continue to work hard.” Garcia said.

“We are confident, we believe we are one of the better teams in conference and we are going to take each game one at a time and stick to our plan.” Rehmani added.

The Leopards went on to defeat the Pomona-Pitzer Sagehens 1-0 to open Southern California Intercollegiate Athletic Conference play on Wednesday.