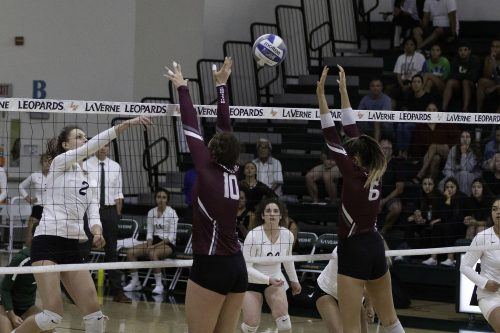 Leopard freshman right side hitter Ayana Mier spikes the ball over Bulldogs middle blocker Hannah Lanyon and outside hitter Christina Casey. The Leopards swept the Bulldogs 3-0 and improve to 2-1 in conference. They return to host Cal Lutheran Saturday at 4 p.m. / photo by Melody Blazauskas

The La Verne women’s volleyball team brought the heat over the weekend, sweeping the Redlands Bulldogs at Frantz Athletic Court with a 3-0 win Saturday.

This is the fifth straight win for the Leopards, continuing their undefeated streak in the Southern California Intercollegiate Athletic Conference.

La Verne has lost just one set in its last five matches.

“Coming into today, we wanted to focus on attacking in the back half of the court, because [the Bulldogs] leave a lot of space open. We wanted to execute the same way we did last game,” said junior libero Emma Estigoy.

The Bulldogs, coming off a 3-0 loss to Claremont-Mudd-Scripps, were unable to match the Leopards’ high energy in the first set, losing 17-25.

The Leopards started the second set at a slower pace and the Bulldogs were not going down without a fight.

While the Leopards maintained their strong defensive ability, they struggled landing the ball in-bounds and returning the ball back over the net.

Things were looking up for the Bulldogs in the second set, as they maintained a consistent 5-point-lead with the score at 16-12.

The Leopards rallied together demonstrating their strength through great teamwork to gain some much-needed momentum.

“We let up in the second set. We thought winning the first set was pretty easy, so we thought the second would be just as easy, but it clearly wasn’t,” Estigoy said.

Offensive leader for the Leopards, junior outside hitter Pi’ikea Clemens, sent over a kill and an ace, along with another kill from freshman middle blocker Rylee Callen, tying it up at 17-17.

The Bulldogs and Leopards continued to fight it out, rallying for one point a piece back and forth.

Senior setter Madison Maynes put an end to the rally with a quick tap over the net.

Following the play the Bulldogs were unable to return the ball back, sending it wide of the court.

After the second set, assistant coach Randi Taylor-Toomay explained how she instructed the team to regain focus.

“That second game we got away from our game plan, but we refocused them on what we practiced all week and to stick to what we know,” Taylor-Toomay said. “‘Don’t rely on them to lose the game, lets come out and win it.’”

The Leopards continued their momentum into the third set, leaving the Bulldogs with little to work with.

Senior outside hitter Darrah Jones and Maynes were offensive weapons for the Leopards.

“We had good energy to feed off of our win from the last set, and we knew [the Bulldogs] would be down from losing, especially after they had us at game point,” Jones said.

Freshman setter Emily Heldenbrand encouraged her teammates to finish what they started.

The Leopards won the final set 25-11 with the Bulldogs giving them little trouble.

Maynes was on fire against the Bulldogs with an impressive overall performance, dishing out 29 assists, 15 digs, three aces and three kills.

Estigoy was a consistent defensive weapon, leading the Leopards with 21 digs and four assists.

“Tuesday is a big match for us, we’re hoping to go in and play as well as we can,” said Taylor Toomay.

On Tuesday, the Leopards fell 3-1 to Claremont-Mudd-Scripps for their first loss in SCIAC, dropping to 2-1 in conference and 8-6 overall.

The Leopards will look to bounce back when they host the undefeated Cal Lutheran Royals at 4 p.m. Saturday at the Frantz Athletic Court.