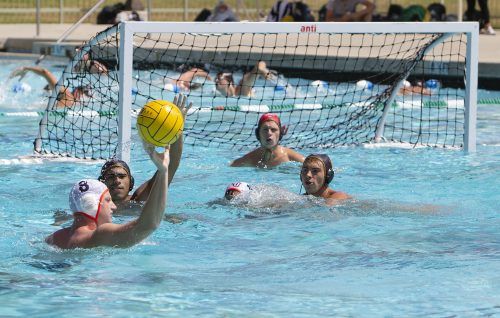 The Leopards started strong on day one, taking wins against Ottowa (Arizona) and Riverside Community College, outscoring their opponents, 31-15.

However after a grueling 14-13 loss against Fresno Pacific to open day two, La Verne would also drop the next game to Concordia, losing 22-12.

After splitting the weekend, the Leopards now sit at a 3-5 overall record, following losses to various Division I teams at the Air Force Tournament last weekend in Colorado.

With the team’s close loss to Fresno Pacific earlier in the morning, La Verne looked to bounce back against Concordia to finish the weekend above .500.

“I think after we had some pretty dominant wins yesterday we might have relaxed a little bit and gotten lackadaisical in our game play today, but that doesn’t give us an excuse for how we performed,” said senior attacker Joey Sabers. “If we’re not all on the same page as a team then we can’t produce the results we want.”

The Leopards wasted no time getting on the board in the first period.

Concordia would rally back with two consecutive goals from junior driver Marius Jakimcikas to take the lead 3-2.

Senior utility Chucky Ortega answered back for the Leopards to even up the score, however, the Eagles would take the lead back with two quick goals to end the period 5-3.

Halchev, who is new to the team, was a standout player for Leopards on day one, leading the team with eight goals in their 2-0 start to the tournament.

“This was my first tournament as a Leopard here at La Verne, it feels good. We went 2-2 which wasn’t our goal, but overall we had a lot of positive things we can take away and work on defensively,” Halchev said. “I’ve known [the coaching staff] since my freshman year of high school. The team is really great and we’re clicking really well.”

Unfortunately for the Leopards, the second period would prove to be costly.

Freshman attacker Nick Taylor would open up scoring for the Eagles in the second period, followed by another quick goal from senior attacker Nick Walker after a Leopard turnover, leading to a near instantaneous 7-3 lead.

Senior center Messan Moore put away two back-to-back scores for the Eagles and would cause problems for the Leopards for the rest of the game.

Aside from a link-up play from Ortega to Halchev for a score, La Verne struggled to generate momentum on offense.

Freshman attacker Gage Unsoeld would finally get the Leopards back on the board as time expired, heading into halftime 12-5.

“We knew that they had big centers, we just had to take away their powerhouse and I think we just had issues doing that and we kept making simple mistakes giving them the ball but those are things we can clean up,” Halchev said.

Things did not improve for the Leopards, as Moore would score in the first three seconds to open up the third period.

Despite scores from Halchev and freshman attacker Alam Barnuevo, the game slowly began to slip away from the Leopards, with La Verne’s defense unable to contain Concordia’s shooters, as Jakimcikas would score three in a row to end the period 17-8.

“I think we messed up in our pressure passing,” Ocasio said. “Also on our defense, we let them counter pretty easily – we were more focused on offense that we forgot what was happening on defense.”

Moore would score his third opening goal to start the fourth.

And while the Leopard defense put up their best effort of the day, the offense was unable to recover from the second period deficit.

Despite a late surge with numerous scores from Sabers, Barnuevo and sophomore attacker Cristian Gonzalez, it was still not enough, as Concordia would take the game, 22-12.

Though despite the tough losses on day two, players are confident in the team’s ability to perform when it matters.

The Leopards will get a chance to prove their ability when they start Southern California Intercollegiate Athletic Conference play on the road against Claremont-Mudd-Scripps at 7 p.m. Wednesday.