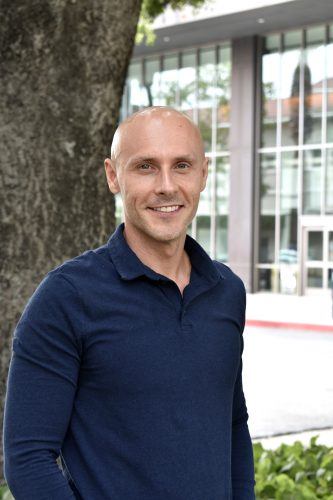 Dinko Kranjac, assistant professor of psychology, is an expert table tennis player and “foodie.” Originally from Croatia, he joined the University of La Verne faculty full time this fall. / photo by Maydeen Merino

After a stint last spring as an adjunct, he is happy to be on the tenure track, teaching neuroscience among other classes.

Kranjac is originally from Croatia, where he grew up in a small town on the outside of the capital of Zagreb.

He came to the U.S. and his current profession through an unusual path.

“I learned that there were places in the United States that offered scholarships for table tennis and academic scholarships, so I moved and stayed there for four years,” Kranjac said. “Then I moved on to earn my Ph.D across town to Texas Christian University.”

“A couple of months of dating, he asked me to go to Croatia with him to see how he lived there and to meet his family,” Ashley Kranjac said.

“I realized he had been playing table tennis since he was 7 and he was really really good. I didn’t even know before I met him that table tennis was a sport.”

Ashley Kranjac teaches medical sociology and statistics in the Department of Sociology at Chapman University.

The Kranjacs also consider themselves foodies, whether they go out to eat or cook at home.

They enjoy exploring restaurants across the U.S., he said.

Kranjac is passionate about health and brain health, said Gary Boehm, professor of psychology at TCU and his graduate school adviser.

“In addition of being a really good researcher and a good teacher, he is passionate (about) eating right and exercise,” Boehm said. “He was probably my most productive student.”

Kranjac earned his Ph.D. in 2013 in experimental psychology with a specialization in behavioral neuroscience and neuroimmunology studying how the immune system activity affects learning and memory processes.

He was a research associate in the Howard Hughes Medical Institute in New York, researching the factors related to post traumatic stress disorder.

He also worked as a post doctoral scholar at Stanford University School of Medicine researching on alcohol abuse and addiction.

He moved back to Texas to work at MD Anderson Cancer Center conducting research related to regenerator medicine, which prevents brain damage from chemotherapy.

He also coached table tennis, before landing at the University of La Verne.

“He always offers to help us in anything we don’t understand,” said junior psychology major Alondra Velaz, who is currently taking two classes with Kranjac.