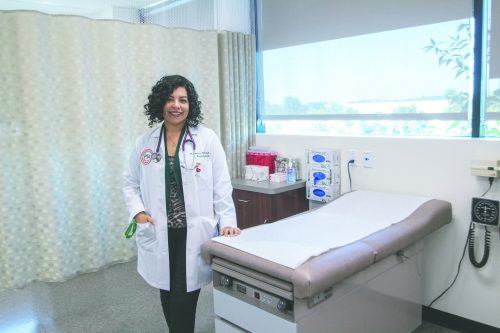 Brianna Cardenas, assistant professor of health, started her full time position this fall as an educator in the Physician Assistant Program. Cardenas has proved that despite preconceptions of people with disabilities, she can still exceed expectations at her job. / photo by Ariel Torres

Cardenas, who started this fall, graduated from the Athletic Training program at the University in 2011 with a bachelor’s degree in athletic training and earned her master’s degree in science as a physician assistant from Western University of Health Sciences in 2013.

She is now an educator with the University’s Physician Assistant Program located on the corner of Garey and Bonita, where she teaches genetics and pathophysiology, the study of human diseases and how they affect our bodies.

“As a disability advocate and chronic illness advocate, I strive to increase visibility and awareness of illnesses that are not obvious to the naked eye,” Cardenas said. “If you look at me, you would assume that I am fully abled-bodied without knowing that I actually have a chronic illness.”

Before becoming an assistant professor at the University, Cardenas worked at Mission Medical in Colton as a pain management therapist and a physician assistant for six years until she was forced to retire from her practice in June due to severe back pain.

After multiple doctor appointments, Cardenas was diagnosed with a genetic disease that caused a spinal fluid leak in her spine and prevented her from walking for a period of time. Cardenas said she suffered from harsh back pain and headaches for four years before the root of the problem was found.

“I was heartbroken because I knew I wasn’t going to be able to work with patients anymore,” Cardenas said. “I loved having students shadow me while I worked, but now I have 46 students that I can influence and educate to become well-rounded medical professionals who are aware of the stigmas that come with many diseases.”

Cardenas said her goal as an educator is to demonstrate to her students that anyone can become a medical professional regardless of one’s disabilities, as well as shape them to be understanding and dedicated with their future patients.

Cardenas also said she wants to make a positive change to the system in which doctors attend their patients nowadays. She said that money gets in the way of actually helping the patient.

“When people go to a doctor’s office and get dismissed in a matter of minutes with little to no information about their symptoms, it discourages them from going back,” Cardenas said.

“Many doctors find it easy to just prescribe a medication as a temporary solution rather than spending time answering questions. Now in hospitals the way they raise salaries is based on how many people they see instead of how good the patients feel.”

Cardenas said she is excited to soon launch her research project at the University, in which she will be focusing on people with Alzheimer’s disease that also have symptoms of spinal fluid pressure.

“As someone who has experienced the excruciating pain of spinal fluid leaks and been through the processes and medical treatments, I hope to, through my research, be able to build connections with others who are going through the same painful process and save them time and money,” Cardenas said.

Cardenas said that much of her passion derives from her own experiences with her chronic illness. She said she not only understands her patients’ pain but can also relate on a physical and emotional level, which creates a stronger bond between a medical practitioner and patient.

Monique Williams, the academic coordinator of the Physician Assistant Program, was one of the first colleagues Cardenas met when she first applied for her position as an assistant professor.

“Brianna came to us and introduced herself and said she wanted to join our team,” Williams said. “Since the beginning, Brianna has proven to be passionate about the work she does. I admire her willingness to learn and grow and how receptive she is to feedback.”

Williams said that most medical providers learn the medicinal aspect of the medical field but often forget about the passion.

Cardenas is a medical practitioner who not only knows the academics of her profession but also goes out of her way to fully understand the entirety of her patient as a whole, Williams said.

“I see the same fire and determination I had as a student in Brianna,” Williams said. “She knows the deficits that exist in the healthcare industry and won’t stop until she corrects them.”

Renee Curtis, a former mentee of Cardenas, said Cardenas was her favorite mentor during her PA training at Loma Linda University and helped her even after she graduated.

“As my presector, Brianna would always make sure that my questions were answered and took it upon herself to teach me about my profession,” Curtis said. “Brianna was not required to help me at all after the six weeks I spent with her but she did. She helped me find a job, made sure I was receiving a fair salary and taught me how to deal with difficult patients and similar stuff that a class cannot teach you.”

Curtis said she recalls a time where Cardenas had an elderly patient who could not afford the medication she needed and was waiting for her son to pay for the medication. Cardenas stepped up and did something that changed her patient’s life, Curtis said.

“Brianna saw that her patient was struggling financially so she paid for the medication anonymously,” Curtis said. “She never told the patient or bragged about it, she did it out of pure good intention.”

Curtis said she admires how Cardenas always had something positive to say despite her physical disabilities and limitations and was so diligent in her work.

Russell Mobley, Cardenas’ mentor and former colleague, said that although Cardenas was still figuring out what she wanted to do when she first started her higher education, she improved over time.

“As a mentor, I see the potential and greatness in my students and can tell which ones are here for a bigger cause,” Mobley said. “Brianna has always been a self-starter and once she became a physician assistant she put her willingness to action.”

Mobley said she shined the most when she worked in pain management and observed how much attention she provided her patients.

“When she had patients who needed physical therapy, Brianna always gave alternatives to medications,” Mobley said. “Instead she would recommend tons of different exercises to reduce the patient’s pain. From beginning to end, she would do everything, even the impossible, to make her patients feel better when they left.”

Cardenas said she is in the process of coordinating and conducting workshops about health care and advice for college students at the University to live a healthier life once the new Lewis Health Center opens on Oct. 18.

“Brianna truly emphasizes what being a Leo for life is,” Williams said.