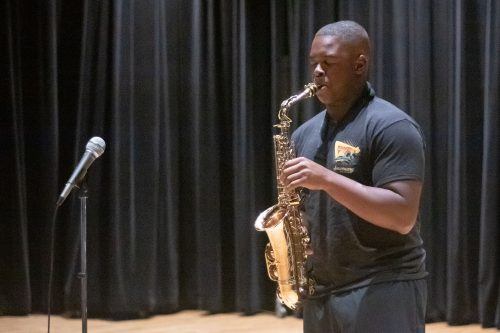 Sophomore business administration major Eric Wilson performs a silky-smooth cover of “Straight Up and Down” by Bruno Mars on the saxophone at the Open Mic Night event Tuesday in the Jane Dibbell Cabaret Theatre. / photo by Ariel Torres

A surplus of talent filled the Jane Dibbell Cabaret Theatre at the Open Mic Night on Tuesday.

The event, hosted by the theater department every semester, allows students to showcase their talents.

“Open Mic Night is a safe space we create for students on campus to express their art,” Cabaret Lead Jennifer Gonzalez said.

In attendance were 20 people providing a comfortable and intimate atmosphere.

Students on stage showcased a variety of vocal styles. Some were bold, with heavy vibrato, while others were softer, with raspy undertones.

All pressure seemed to be removed from those performing as the audience provided an encouraging atmosphere as they applauded those who participated, never expressing disappointment for any of the talents.

Kirin Lo, sophomore English major, sang a powerful cover of “Counting Stars” by One Republic, filling the room with soft vocals and melodic guitar chords that had caused the audience to sway and sing along.

Lo then sang with his friend Rae Revilla, a junior theater major.

They opened up their performance singing “My Happy Ending” by Avril Lavigne.

The crowd listened closely as Revilla delivered powerful vocals and set the tone for the talent to be expected for the night.

They continued with a Japanese song titled “Winter Story,” something Revilla spent his own time translating to English.

That song became a crowd favorite.

“The song really spoke to me because it’s about a late lover,” Revilla said. “I’ve never experienced that personally, but deep inside there is that fear that we will lose someone.”

Megan Ehrenberg, freshman music major, provided a touching performance singing Whitney Houston’s “I Have Nothing” that earned a few shouts and wave of claps from the audience.

Ehrenberg described the song as her go-to for karaoke, and said she has been singing it for as long as she can remember.

In addition to those who sang, there were several students who shared pieces of poetry as well.

“Dear black girl, we are warriors whose spirits can’t be crushed,” Glothon said.

The passion filling Glothon could be seen pouring out through the emotions heard from the shake in her voice and seen in the trembling of her hands.

The spoken word piece had been dedicated to young black women everywhere.

The poem provided the perspective of a young woman regarding the effects of neglect from an absent father, and the way mistreatment completely altered not only her confidence, but the way she carries herself.

The room was completely silent as he recited the poem, even bringing some audience members to tears with the raw emotion.