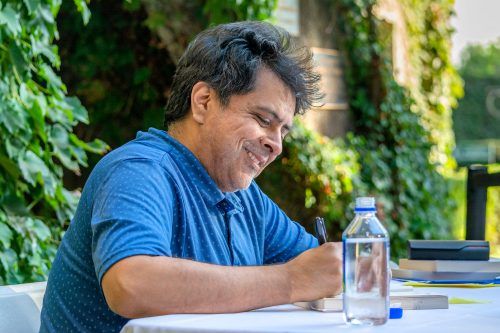 Author Brando Skyhorse signs copies of his memoir “Take This Man” after his One Book, One University keynote lecture Wednesday in Fasnacht Court. / photo by Veronyca Norcia

Brando Skyhorse, author of this year’s One Book, One University selection, “Take This Man,” spoke to a crowd of roughly 50 Wednesday in Morgan Auditorium.

Skyhorse used his time to tell several personal stories that he said if listened to closely could offer a deeper message to everyone sitting in the audience.

“Mr. Skyhorse’s memoir is a highly personal narrative, but is a story familiar in many ways to the American experience,” said Joshua Jensen, director of first year rhetoric and writing program. “And as we’ve discovered in this past month, to many of our students here at the University of La Verne who are navigating a sense of who they are in the world despite racial, gender, cultural and other identities that have been imposed upon them.”

Skyhorse spoke about his mother and her struggles with borderline personality disorder, and told the story of how his father had abandoned the two of them when he was 3, resulting in his mother taking it upon herself to completely create an identity for him.

Until the age of 12, Skyhorse had believed he was Indian-American. However, he was actually Mexican-American with the last name of Ulloa.

“I write and report my findings about race, class and ethnicity,” Skyhorse said. “These are subjects people feel comfortable ignoring. I write about the invisible hands that help our society function. This is not an easy thing to do, especially if you are poor, or a person of color, or someone that our society wants to be both unseen and unheard when appropriate, and visible only when necessary.”

The first story he told highlighted an experience he had with a bank teller who kept insisting he tell her where he was from, although he had already told her that not only did he live in the city, but that he came from Connecticut prior to, and his parents from California.

The bank teller had pressed Skyhorse for something he described as a story tax.

“A story tax is the price someone considered unusual has to pay to a gatekeeper who considers themselves the usual,” Skyhorse said. “When I don’t immediately explain my name and reveal my ethnic background … then I can be detained away from my daily activities and not get to do what I want. What do I want? I want to run my errands without having to pay a story tax.”

Although his mother had lied and created this identity for him, he still identified as Indian-American when applying to and attending Stanford University.

Skyhorse highlighted a student he had gone to school with who was college-bound as well, in which the individual told him his schooling did not matter when affirmative action would place him at the top.

“Students groomed for success had one distinct advantage over me, they were told they belonged and acted accordingly even when their initial grades suggested otherwise,” Skyhorse said. “My undergraduate adviser, who also didn’t know I wasn’t Indian, later confirmed to me affirmative action, nepotism, money, it’s all the same. Everyone uses what they have to get in.”

The last story Skyhorse told was about a fan letter he received from a Mr. White in San Francisco. The letter highlighted White’s feelings toward Mexicans and assimilation, stating that maintaining Mexican heritage may be one thing, but not learning the English language means they should instead just “go back to where they came from.”

By ending the lecture with this story, Skyhorse emphasized that words such as those will never degrade him because he can be seen, and he is visible.

“To those of you here who understand what it is like to be rendered visible only when it is convenient for you to be seen as other, criminal, or someone who has been told you don’t belong here in this country, invisible when you want to be seen as an American, let me say to all of you here, I see you,” Skyhorse said. “You belong here.”

“This memoir reflects Mr. Skyhorse’s unwavering drive to tell his own story, to not let his experiences define him, to speak his own truth,” Hernandez said. “He exemplifies a lot of difficulties and dysfunctionalities we may have in our life; they do not define us and we cannot let ourselves be victimized by them.”

Following his lecture, the audience had a chance to ask Skyhorse questions.

Several students came up to the two microphones set across each other at the front of the stage to ponder with him his writing ability, his ties to those mentioned in his book and his feelings toward his mother.

“It seems like your mother did something that could have been a serious offense, I feel like anybody would have resentment toward any person who has done this kind of thing, but she’s your mom,” Dora Varner, sophomore psychology major, said. “I’m wondering how that was for you.”

Skyhorse said that although not a day that goes by where he does not think of the hurt she has caused him, he has maintained a positive perspective through the practice of therapy, stating he would probably be in therapy for the rest of his life.

“There would be a lot more resentment if I hadn’t been in therapy for a long time,” Skyhorse said.