By Alondra Campos, Maydeen Merino on October 25, 2019 in News 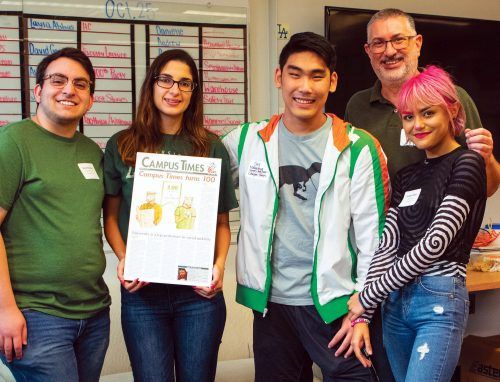 About 150 former and present communications alumni, students and faculty – with several former Campus Times editors-in-chief – came out to celebrate the Campus Times’ 100th anniversary, with a party and exhibit of front pages through the ages Saturday in the ACB.

“One hundred years is an incredible milestone, particularly for a newspaper, particularly for today’s chaotic media world,” said Elizabeth Zwerling, professor of journalism, who has advised the Campus Times since 2001.

She quoted an often referenced journalism quote about journalists’ responsibility to “Comfort the afflicted and afflict the comfortable,” in a welcome speech emphasizing the importance of a free press for the campus community, and as a training ground for the important job of professional journalism, which she also explained is still going strong.

“Imagine if we didn’t have great journalists, great journalism, a free press, a First Amendment, a Fourth Estate – with what’s going on in our country and our world right now,” Zwerling said.

Zwerling talked about the impressive jobs Campus Times alumni now have in professional newsrooms, including ABC, NBC, and CBS news, NPR, the Los Angeles Times, the BBC and more.

And she thanked University of La Verne President Devorah Lieberman – who also came and spoke at the celebration – for her support of a free press at the University.

“Our Campus Times reporters and editors live by integrity and they are the future of real news,” Lieberman said. “It’s really great for me, as president, to know that articles in our terrific paper are well balanced and backed up with facts and data.”

The Campus Times newspaper was first published on Oct. 14, 1919. The centennial issue was published Oct. 18.

Many former Campus Times editors, reporters and photographers attended the event, including Steve Simmons, who was editor in chief in the 1975-76 academic year, which was the first year that the Campus Times was part of the newly formed communications department.

“Before the Campus Times became a course, it started off as a club where anyone who wanted to write for the newspaper could,” Simmons said. “It wasn’t until Esther Davis spoke to me about having newspaper production offered as a program so that journalists could be appropriately trained.”

Professor Esther Davis was the founding communications department chairwoman who brought the Campus Times into the new journalism curriculum in the spring 1976 semester.

Simmons was the first editor-in-chief after the Campus Times became part of the journalism curriculum. Simmons returned to the department in the 1980s and served as Campus Times faculty adviser for three years.

“It was fun being an academic adviser of a department that I was previously a part of,” Simmons said. “When I came back, we had the big computers to work on, and although that’s ancient technology in today’s world, it was a big deal for us at the time.”

Ellen Simmons, Steve’s wife, is also a former editor in chief for the Campus Times. She said she valued the skills that the newspaper production course offered her and helped develop her as a professional.

Ellen Simmons works at the Walt Disney Company as a comedy team leader, and she oversees publicity efforts for ABC’s comedies.

“Working on the newspaper taught me how to be more responsible and professional in my field (and) improved my communication skills when I interviewed all kinds of people,” Ellen Simmons said.

In the ACB newsroom, Campus Times alumni from the past several decades perused archived copies of the paper dating back to the 1970s.

Historic front pages were displayed on poster boards throughout the building.

Teresa Gonzalez, Campus Times photography editor in 1983 found some of her past work.

“Some of the photos in these archives I don’t even remember taking,” Gonzalez said. “It was so long ago, but seeing these old news articles and photos takes me back to my time at La Verne.”

Doug Waite, who was a Campus Times reporter in the 1980s, said the political reporting he did back then crystallized for him the importance of journalism in the world.

“Seeing history in the making is really fun for me,” Waite said. “I remember when the Nixon Institute was potentially going to come on campus and I was really excited to be assigned to that event. If it wasn’t for the practice of journalism, I probably wouldn’t have learned the accurate information I know today.”

Layla Abbas, current editor in chief, said she values the experience of working on the newspaper.

“I loved the rush of breaking news because you were called to be on the scene in a matter of minutes and had the opportunity to get a real scope of the story,” Lau said.

“I first got hired as a copy editor in corporate communications for Wells Fargo, which was perfect since I already had copy editing experience from working on the newspaper,” Lau said. “Then one day a writing opportunity came up at work and I had no problem in taking it since I had a valuable news writing background that only Campus Times could have given me.”

Christina Garcia, news editor in fall 2016, worked alongside Lau and covered many political stories in the lead up to the 2016 election.

“I was a political science major, so Elizabeth gave me a politics section to work on, which taught me more than what I knew about politics,” Garcia said. “The events and research I conducted for the newspaper actually helped me in my own major and gave me a deeper knowledge.”

Garcia, along with Lau, covered the protests on campus that immediately followed the election of Donald Trump.

“If it weren’t for the newspaper, I probably would not have attended the protest and learned the different perspectives people had on Trump’s presidential election,” Garcia said.

Charles Bentley, who graduated in 1982, was editor of the La Verne magazine and a staff writer for the Campus Times.

“As a journalist … it is your responsibility to provide a fair representation of both sides of any story,” he said.

The Saturday event also featured a delicious spread of hors d’oeuvres including bacon-wrapped dates, stuffed mushrooms, and a couple of 100th birthday cakes.