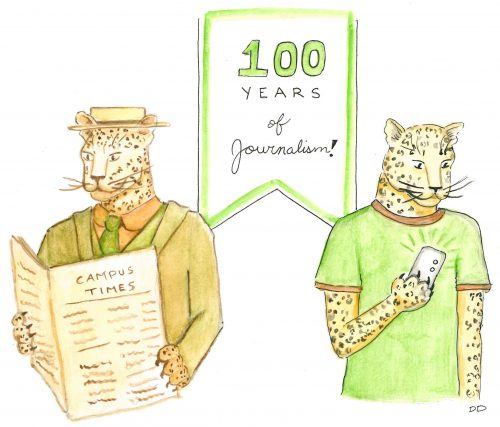 The Campus Times has just hit its centennial milestone as of Monday. The first Campus Times was published on Oct. 14, 1919.

With a newspaper almost as old as the University, there is plenty of history to unpack.

In 1919 the Campus Times was started as a replacement for the Palmerian, a campus literary magazine, which also included short news items, but was unpopular with students.

It was in the very early days when articles detailing the latest student party in the paper’s “society” section could be found alongside articles referencing the leisurely activities of “lady-teachers,” as well as commentary on college co-eds’ expectations of romance (written by a male counterpart). One early piece explored whether or not women can make good bosses. All incredibly sexist by today’s standards.

There were various holiday themed issues, such as one April Fools edition that featured a page printed completely upside down, and the Easter edition with a massive cartoon Easter Bunny on the front page.

The name “Campus Times” was suggested by student C. Ernest Davis, who was part of the first Campus Times editorial staff. He later became president of La Verne College, from 1938 to 1948.

By Nov. 13, 1935, the publication was back, albeit through stenciled mimeographed packets.

Each week, the Campus Times put out a mimeographed packet consisting of six-to-eight pages stapled together with words typed directly onto the pages alongside hand-drawn mastheads and illustrations that differed week to week. Each week the mimeographs offered a new, different look for the Campus Times.

In November of 1937, the Campus Times was able to return as a full-on newspaper with the help of the old La Verne city newspaper, the La Verne Leader. Four years later, in 1941, the newspaper transitioned to a bi-monthly publication instead of weekly.

It went back to a weekly publication schedule more than a decade later, in September 1952.

The Campus Times’ transition back to weekly publication in the ’50s coincided with the first journalism classes at La Verne, although it was not a full-fledged major yet. In 1959,the paper was officially re-branded as the New Campus Times, a change that lasted until 1961.

Looking through the archived copies in the Wilson Library, one could see the New Campus Times printed in each masthead produced for those two years of rebranding.

The Campus Times hit another heyday of sorts in the late 1960s, driven by a fiery opinions section that captured the tumultuous times in the nation. With the start of the 1970s, the paper was taken over by the student government and operated as a student club, publishing less frequently.

In 1975 Professor Esther Davis founded the Communications Department. She spearheaded the development of curriculum and majors in journalism, radio and television. In the spring of 1976, she brought the Campus Times into the department as part of the journalism curriculum.

Prior to Davis and the new department, the newspaper was run by the Associated Student Federation Forum, rather than the journalism and communications students seen running it today.

George Keeler, professor of journalism, was an early graduate from the new program in 1977. In 1976 he was managing editor of the Campus Times in 1976.

Keeler described the production process for students in the ’70s as full of “angst and temper,” because students didn’t have the easy technology we have today. Keeler recalled how writers would have to send their stories to have their work typed up on an electric typewriter. Staff was not allowed to touch the typewriter, making the process even more difficult after those responsible for the typewriter left around 5 p.m. each day.

“We always had a Dickens of a time, because that (typist) would make mistakes too,” Keeler said. “I remember cutting letters out, making letters. Sometimes it was like one of those hostage letters.”

Although the process may have been a bit more difficult back in the 1970s, Keeler acknowledged that he looks at the paper today and sees many of the same concepts from back in his day on the paper, such as accuracy, objectivity and sensitivity.

“Being accurate, fair and responsible, those were the three words we went by,” Keeler said.

Same as today, said Elizabeth Zwerling, professor of journalism, who has been faculty adviser since 2001.

“The news cycle and modes of delivery have changed. The politics are different on campus and beyond, but the vision, ethics and insistence on accuracy and redeeming social value remain steady,” Zwerling said.