By Alondra Campos, Katelyn Keeling on October 11, 2019 in LV Life 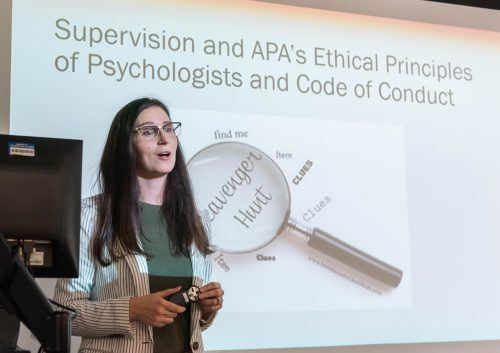 Nicole Mahrer Malotte, assistant professor of psychology, teaches a class on the ethical principles of psychologists. Mahrer, a mother of twins, specializes in parenting and uses her experience as a mother to help her work with clients. / photo by Katelyn Keeling

Clinical and child psychologist Nicole Mahrer Malotte started her position as assistant professor of psychology in the Doctor of Psychology program full time at the University of La Verne this fall.

Mahrer Molotte instructs her students about cognitive behavioral learning, a therapy approach to treat anxiety and depression, as well as cognitive assessment, where students learn how to conduct intelligence testing and identify learning disabilities among children.

She also teaches her graduate students how to become supervisors in psychology.

“I was a child when I became interested in psychology and I think that’s where my interest in child psychology came from,’’ Mahrer Malotte said. “I love child psychology because if you could intervene early enough in a child’s life, you could help prevent a number of mental health problems.”

She received her bachelor’s degree in psychology from UC San Diego in 2007, where she conducted research about children with autism and how to identify the disorder at an early age.

Soon after graduating, she worked in a lab that treated pediatric chronic pain at the Children’s Hospital of Los Angeles and volunteered to do group therapy with kids until 2009.

In 2015, Mahrer Malotte received her doctorate in clinical psychology from Arizona State University.

After completing her first post-doctoral, she continued to pursue her second post-doctoral to become a psychology professor at UCLA, where she conducted research on how environmental and family factors can potentially predict a child’s physical and mental health.

“Parental practices differentiate with different cultures,” Mahrer Malotte said. “The idea of a ‘good parent’ is different in each community.”

As a clinical and child psychologist, she studies families and assesses the different strategies parents use to raise their children.

“There are not many other faculty members who specialize in child psychology and I’m excited to offer my new knowledge to students,” Mahrer Malotte said.

By next fall, she plans to start the child, health, environment and culture lab, also known as CHEC, where graduate students at the University will be working on different studies about children and the factors that influence their physical and mental health state.

Mahrer Malotte plans on assigning an Abuela study assignment, where students will have the opportunity to closely observe children in Latino households.

“Students will be interviewing Latino parents about their parenting techniques and observe the kids and the efficiency of the parents’ strategies,” Mahrer Malotte said.

In addition, Mahrer Malotte also said she would like to work with Children’s Hospital of Los Angeles and have her students work with children there.

“My goals as a professor are for my students to be able to apply what they learn in class and their experiences to the real world as well as become strong presenters and writers in their research, core skills that are essential to psychology,” Mahrer Malotte said.

Jeffrey Gold, Mahrer Malotte’s mentor at ASU, said Mahrer gives great importance to the upbringing of future generations and the information they receive.

“Nicole really cares about the education of the next generation and takes her job seriously,” Gold said. “She is very thorough in whatever she sets her mind to and what she starts she finishes.”

Gold said Mahrer Malotte is also culturally competent as a professor and psychologist and has broad knowledge on clients of all backgrounds.

“Nicole not only knows but understands the different experiences that cultures and different genders (have),” Gold said.

Mahrer Malotte worked as Gold’s research assistant at CHLA and they published many research papers together, Gold said. During her fellowship at CHLA, Mahrer won an award for her research.

Mahrer Malotte said her parenting experience as a mother of twins can become useful tools when she begins to work with clients again.

“Because I have a specialization in parenting, I tend to focus on my kids and observe them and their behavior,” she said. “I’m excited to start having clients of my own again because I have more appreciation of being a parent and how hard it really is.”

Mahrer Malotte’s husband, Christopher Malotte, said she is both an attentive mother and actively engaged member of her community.

“Nicole is always looking for what is best for the twins and always knows what to say or do for them to grow in the best environment,” Malotte said. “Family members and friends always go up to her for help and she always makes herself available to help as much as she can.”

Kaitlin Bountress, Mahrer Malotte’s classmate and friend from graduate school, said she is very approachable inside and outside of her field, something that patients are attracted to when they visit their psychologist.

“Mahrer is extremely intelligent but she isn’t the type of person to brag about her accomplishments, she allows herself to naturally shine,” Bountress said. “She is one of the most selfless people I know.”

Bountress said she recalled a moment in grad school when Mahrer chose to give Bountress an opportunity that was originally given to Mahrer Malotte.

“There was this external practicum in grad school that several students wanted but only one student was chosen,” Bountress said. “Nicole was offered the external practicum and I was very proud of her, but she knew how bad we both wanted it so she decided to pass the offer to me. She didn’t have to do that at all and that just proves how selfless she can be.”

“We always plan a yearly trip together and catch up on our lives,” Bountress said. “Many of the friends she made in grad school still admire her to this day and just love having her around.”