By Campus Times Editorial Board, Danielle De Luna on October 11, 2019 in Editorials, Opinions 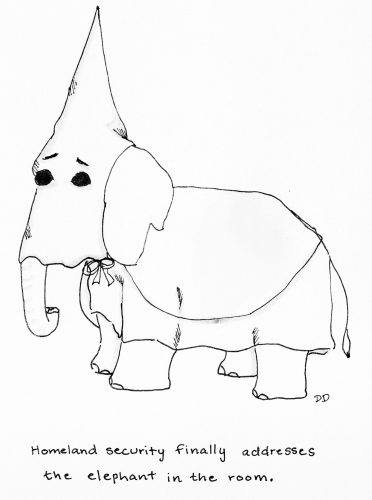 Last week the Department of Homeland Security finally deemed white supremacy as a primary security threat in response to countless mass shootings that have claimed the lives of over 100 people in the last six months.

While radical groups like Al Qaeda and the Islamic State still being watched, it is long overdue that we finally acknowledge the terror that comes from white supremacy.

The Anti-Defamation League has reported that, last year, white supremacy perpetrated 39 of 50 domestic extremism-related killings in the United States.

The same year saw only one death linked to jihadst terrorism in the U.S. The rise of hate speech and white-supremacist propaganda on the internet paired with the growing gun violence has created a deadly combination.

On Dec. 14, 2012, a gunman walked into Sandy Hook Elementary School in Newton, Connecticut, killing 20 children and six adults before taking his own life.

It was one of the most terrible acts of violence our country had witnessed since Columbine. The people were promised something like this would never happen again, but more were soon to follow.

Next came the Orlando nightclub in 2016 that left 50 dead. Then Las Vegas in 2017, that killed 59. Then in Parkland in 2018. The death toll and frequency of these horrific shootings only seem to grow with each occurrence.

The Department of Homeland Security’s report also highlighted white-supremacy fueled shootings at synagogues in Pittsburgh and Poway, California, the mosque massacre in New Zealand as well as the Walmart shooting in El Paso, Texas.

The Department of Homeland Security’s push for greater security measures began with the publishing of an inconspicuous strategy guide for law enforcement on emerging threats last month, followed by many public appearances by acting Secretary of Homeland Security, Kevin McAleenan. The push contrasts that of President Donald Trump, who shrugged off the threat of white-supremacy as a fringe movement.

On Aug. 12, 2017, Virginia Gov. Terry McAuliffe declared a state of emergency following a white supremacist march through the University of Viginia campus and a subsequent march on Lee Park, chanting neo-Nazi and anti-semitic slogans.

Trump’s initial comments were received with backlash, as he condemned “hatred and bigotry on both sides,” referring to each party as having “very fine people on both sides.”

Trump is respsonible for encouraging and inciting the danger white supremacists inflict on our country by his rhetoric. White supremacy has played a huge part in the United States’ development and is part of our history. It is about time the issue is being labeled for what it is.