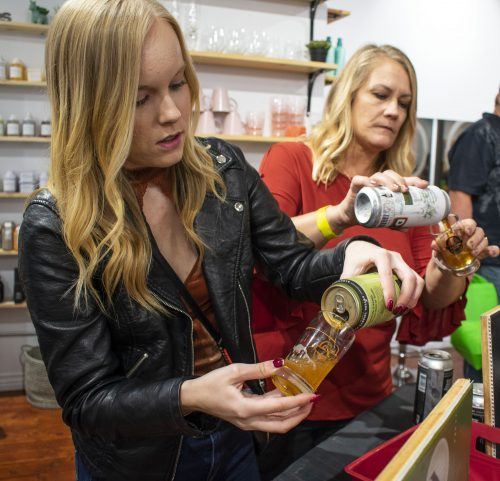 Downtown La Verne was flooded with about 200 people drinking beer and talking at every corner.

There were also nine musical acts scattered throughout the various locations.

“When you have good food, good beer and good friends, what else do you need?” said Craig Walters, chairman of the Old Town Business District.

Local breweries, like Alosta Brewing Co. and Old Stump Brewing Co., took part in the event and was served alongside small appetizers prepared by nearby restaurants.

After purchasing their ticket for the event, guests were given a wristband, a 5 oz. tasting cup and 12 tickets redeemable at each beer and food stop.

The proceeds from the event go back into making improvements for downtown, with a portion of the proceeds going toward the La Verne Police Department’s Retired Volunteer Senior Patrol.

Walters says the next improvement will be to build a small stage in Mainiero Square.

“It’s just a great event to bring people and the community together, everybody has fun and it’s a wonderful event,” said Micky Rehm, owner of Micky’s Jewelry Studio.

Prior to its inaugural walk last Fall, demand for a beer walk increased dramatically following the success of the city’s local wine walk.

“The whole reason we do the wine walk and the beer walk is to expose people to Old Town La Verne,” Walters said.

With the local vendors and restaurants hosting the event, guests were able to meet the owners of the many downtown businesses, exposing them to places or foods they would not normally explore.

“Downtown has a lot to show off and that’s what we’re trying to do as the business community: to show how great downtown is,” Rehm said.

Kristi Marshall and Matthew Marshall, owners of Salon Bloom, said that while pouring beers and handing out coupons, a guest wanted to book an appointment – essentially paying for the salon’s registration fee for the walk.

“Rather than just doing a street event, all of the beer for the event is served inside businesses, so when people walk in they can meet the owner and see what they have to offer,” Walters said. “It’s a great way to have a good time but also to explore what’s out there.”

“They have some interesting combinations but it’s really good and I’m always open to trying new things,” Murillo said.

Because the walk was exclusively catered by local vendors, attendees were able to try a little bit of everything in downtown.

“It’s not just plates of h’orderves or cut up vegetables, these are all local restaurants, so you get to try some pretty fun stuff while discovering new places,” Walters said.