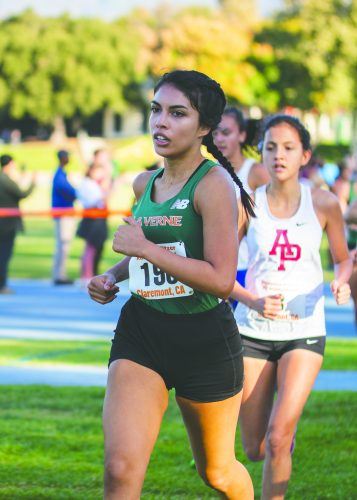 The five-mile course pitted runners against rugged terrain including hills, gravel patches, and grass with multiple loops and roundabouts.

Head coach Justin Wood however had been prepping the Leopards for this course since day one.

Wood also took into account fatigue as the team just came back from competing in Louisville, Kentucky, this past week.

“There were a lot of uphill and downhill stretches where you’d gain momentum,’’ freshman Alex Medina said. “The turns and loops however killed any momentum we had coming down and it was rough trying to get that back.”

Of the competing nine teams, the Leopards placed seventh overall with junior Matthew Salas leading the line with a time of 25:58.3 and placing 13th individually.

“I had a good kick but I should have kicked with about a quarter mile left to go,” said Salas.

Diego Duran from Cal Poly Pomona rounded out the top three for the men with a time of 25:28.6. Pomona-Pitzer came second best overall at home to Cal Poly Pomona.

The women’s race began at 8:30 a.m. as the sun began to peek through the tree line.

The women’s team placed eighth overall with junior Ashley Garnica placing 35th individually and finishing with a time of 24:38.3.

Posada and freshman MacKenzie Lazarus finished side by side at 25:1.

“In my head I knew coming into the home stretch I had to take the reins off and just go,” senior Catherina Posada said.

Cal Poly Pomona took home the women’s title and Pomona-Pitzer again placed second. Helen Guo from Pomona-Pitzer wrapped up the course in 22:9.8 while Cal Poly Pomona duo Luz Garcia and Elizabeth Hernandez kept it close with their times of 22:11.5 and 22:24.7 respectively.

“I’ve ran this course many times so most of the time it’s me trying to push when it gets harder at the end,” Garnica said.

This is just the first of three races in a series to be held at Pomona-Pitzer, the Leopards will be back Nov. 2 for the SCIAC Championships and Nov. 16 for the NCAA Western Regionals.