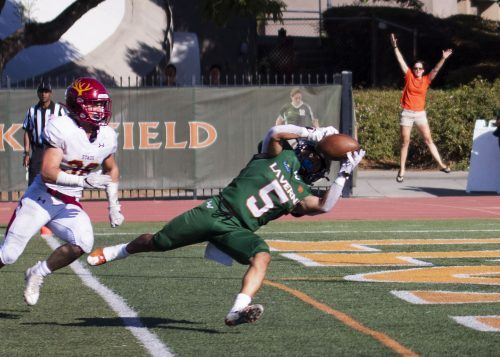 The Leopards came into the game fresh off their bye week following a crushing 28-24 defeat to the Puget Sound Pirates.

However, the chance for upset looked slim in the first quarter. Senior running back James Gonsalves fumbled the ball on the Leopards first play of their opening drive, setting up the Stags with great field position. Sophomore starting quarterback Zach Fogel went straight to work, beautifully orchestrating the Stag offense. After Fogel threw a 29-yard dart to sophomore tight end William Smith, he kept the ball on the next play, setting up the offense on the Leopard goal line.

A short rush from senior running back Garrett Cheadle would give the Stags a 7-0 lead just two minutes into the game.

The Leopards looked to shake off the early fumble, mustering a promising drive into Stag territory. However, after senior quarterback Matthew Albright took off for a big gain, he fumbled, once again giving the ball back to the Stags.

“We didn’t execute as well as we should have and gave up a lot of big plays,” Albright said. “Started out the game with a fumble, then we come back on the second drive and I fumble. Everything was going their way and we were just playing horrible, but our defense kept it a close game and gave us a chance.”

On Claremont’s next drive, Fogel picked up right where he left off, efficiently dissecting the Leopard defense for 67 yards on four plays. The drive ended when La Verne senior cornerback Torii Hilbert made a clutch interception in the end zone to deny Claremont the score.

Despite the slight shift in momentum, the Leopard offense was unable to put a drive together, punting on their next two possessions. Meanwhile the Stags scored off a 28-yard run from junior running back Jordan Leonard to put them up, 14-0.

“We started off slow, and against a team like that, we were lucky to stay in it,” head coach Chris Krich said.

Although the offense failed to produce, the Leopard defense came up big for La Verne, stopping the Stag offense on fourth-and-one to force the turnover on downs, ending the quarter.

The Leopard offense switched things up in the next quarter, swapping in their second starting quarterback, senior Sam Taylor.

Taylor showed off his wheels when he kept the ball on a read and picked up 20 yards, then burned the defense for 26 yards on the next play, putting the Leopards on the goal line with a chance to score.

Gonsalves took the handoff, leaping over the linemen to put La Verne on the board, 14-6, but junior kicker Diego Garcia miss the extra point.

Fogel returned with the Stag offense looking to answer the score, but after a big hit that put him out of commission for the rest of the game, Claremont was forced to punt.

Unfortunately, the Leopard offense was still unable to produce, punting away their possession. Despite the offensive woes, this gave Leopard sophomore punter Arturo Herrera-Caballero to showcase his ability. The sophomore averaged 43.4 yards per punt, with a long of 55, constantly pinning the Stag offense deep in their own territory.

With junior quarterback Jake Norville now under center for Claremont, it became clear the Stag offense was far less potent without Fogel.

But Norville was still productive thanks to help on the ground from Leonard, driving the Stag offense to the Leopard goal line.

But the Leopard defense came up big once again, as junior cornerback Gary Bojorquez came down with another crucial pick in the end zone that again denied Claremont the score, ending the quarter.

“That takes studying, that takes hard work, that takes preparation. The way that coach Stewart orchestrated his defense the whole game was amazing,” junior receiver Nathaniel Sagastume said. “Hats off to the defense, I can’t thank them enough.”

Krich said that despite being down by eight points, the team never lost hope and stayed focused throughout.

“They knew how close we were, we actually felt okay and we weren’t out of the game,” Krich said.

Although the Leopards were forced to punt on their possession, the defense was able to stuff the Stags on multiple drives.

A 76-yard punt return touchdown from sophomore wide out Jacob Barriga put the home crowd on their feet, but the score was called back due to a penalty early in the play.

The third quarter proved to be a defensive stalemate, with neither team able to reach the end zone. La Verne struggled to run the ball, which is usually their forte, allowing them to control the pace of the game. Leopard senior running backs Martaveous Holliday and Gonsalves did not see many rush attempts, as the Stag front seven proved they are championship caliber.

“We got two of the best backs in the league so we’re definitely going to look to run, but CMS, that’s the defending SCIAC champs right there. So they got some guys up front that were making some big plays,” Taylor said.

The fourth quarter seemed to be going the same way, with each team punting on their first four possessions.

But after a Barriga return put the Leopards into Stag territory, Albright returned under center, completing a 27-yard floater to Sagastume. The Leopards were nearly stifled on fourth-and-seven, but Albright was able to scramble to pick up the first down.

Albright torched the defense on the next play, rushing 24 yards for the touchdown with a key block from Holliday to make the score 14-13.

The La Verne offense made a gutsy call to go for the two-point conversion that would tie the game up. Sagastume ran a drag route that left him wide open, Albright made the connection and the game was tied at 14.

“We repped that all practice and going to set up before the play I just imagined running it perfectly,” Sagastume said.

With four minutes to go in the game, the Stags put together a solid drive that put them in field goal position. Luckily for La Verne, sophomore kicker Alessandro Maiulo would miss the 34-yard attempt wide right, his second miss within 40 yards in the game.

However, interceptions from both Taylor and Albright would nearly give the Stags the game back. But the defense proved its worth, stopping the Stag offense as time expired, forcing the game to go into overtime.

Claremont received opening possession in overtime on the Leopard 25-yard line, but were unable to find the end zone, instead settling for a field goal that Maiulo would drill through the uprights to take the lead 17-14.

“We didn’t want [the defense] out there any more, we could have gone for the field goal but we decided, no, let’s go for the win, let’s end it right here,” Krich said. “Coach Reveles called a great play. Coach Martinez was the driving force behind the decision to go for it on fourth down,”

Sagastume would again create magic for the Leopards, managing to slip behind the defensive secondary and came down with the walk off touchdown, ending the game 20-17, in a huge win for the home team.

“I think it was a great team win. Offense came up big at the end, but defense played their tails off all game,” Taylor said.

Despite the high stress levels at times, Albright says he cannot recall a game that as much fun to play in as Saturday’s win.

The Leopards next travel to Pomona-Pitzer to face the Sagehens at 7 p.m. Saturday.