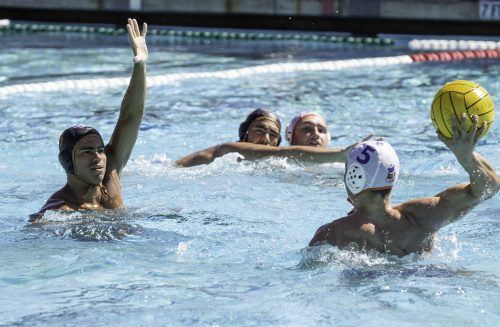 The men’s water polo team fell short to the Southern California Intercollegiate Athletic Conference powerhouse, the Pomona-Pitzer Sagehens, 19-16, as the Leopards were unable to respond to a third quarter scoring streak by the Sagehens.

Both teams were evenly matched throughout the first quarter. The Leopards and the Sagehens took turns scoring back and forth, each team unable to get a significant lead over the other.

“Our strategy was to be calm in our possessions and use as much of the clock as we can. I think they boys did a fantastic job at that,” said head coach Pat Beemer.

As the clocked ticked down, it seemed both teams would end the half with the game tightly locked at 9-9. Offensive leader, senior utility Charles Ortega found the back of the net just beating the half-time buzzer, with a quickly paced shot past the Sagehens goalie James Kelbert, giving the Leopards a 1-point-lead.

The Leopards’ bench responded to the buzzer-beater with an eruption of cheers, propelling the team forward into the second half of the game.

By the end of the game, Ortega scored five goals and had one assist, and senior center Vasil Halchev paired four goals of his own with three assists.

“We did good on offense, but our downfall was perimeter shooting and getting our hands up to block,” Ortega said. “We couldn’t shut them down on defense, they are a really good team with good scorers. We have to make those stops.”

The Leopards’ lead extended to 11-9 at the start of the third quarter, with a goal from sophomore attacker Myles Storms following a steal by defensive leader, senior center defender Rex Sample. Sample would go on to have five steals and an assist for the game.

“We planned to have our own tempo and to not get sucked into their fast break attacks but defensively we got tired,” freshman attacker Gage Unsoeld said. “We need to clean up our one-on-one defense.”

The momentum for the Leopards would ultimately be short-lived, as the Sagehens rallied off six consecutive goals for a lead they would hold for the remainder of the match.

The third quarter ended with the largest difference of the match, 17-12 in favor of Pomona-Pitzer.

Despite the deficit, the Leopards swam out hopeful for a comeback in the fourth quarter. Senior attacker Guillermo Ocasio surprised the Pomona-Pitzer goalie with a backhand shot, making the score 13-18.

Ocasio finished the game with two more goals, a pair of steals and a game-high of five assists. Freshman attacker Alam Barnuevo also contributed three goals for the Leopards.

Ultimately, the Leopards outscored the Sagehens in the fourth quarter 4-2, but it still was not enough to take the lead.

“Our defense was not great, giving up 19 goals is way too many. Offensively, we scored well above average, but allowing that many goals is terrible,” said Beemer.

The officials called eight penalties throughout the match, resulting in eight total goals off of the 6-on-5 power-plays.

Beemer recalls the players’ strategy during the 6-on-5 plays.

“We are trying to move the ball to [the middle] because we have strong guys there in good shooting position. The times that we did do that, we scored goals,” Beemer said.

The Sagehens would benefit from this, as they put away five goals off of penalties, while the Leopards scored three.

“This game shows our driver defense needs improvement, we had a lot of penalties called against us so that really put the game into their hands,” Barnuevo said.

“Going into next week, we’re working on a lot of defense and blocking the ball,” Beemer said.

The following day, the Leopards dominated in a pair of non-conference games, winning the first against Austin 17-12, then versus Washington and Jefferson 13-6.

Barnuevo had a huge offensive game against the Austin squad, netting six goals paired with an assist and a steal.

Ocasio had a big game against Washington and Jefferson, finding the net four times, with hat tricks from both Halchev and Ortega.

The Leopards then took on Caltech on the road, dismantling the Beavers 16-7, with Storms leading the team with a hat trick.

The team will return home against the Cal Lutheran Regals Saturday at 11 a.m.