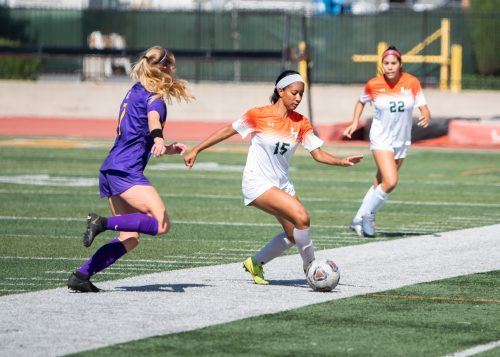 The women’s soccer team suffered a 4-1 loss against the Cal Lutheran Regals on Saturday at Ortmayer Stadium.

The Leopards came out fighting with consistently strong defense and were able to move the ball along the field, keeping the Regals from scoring. The Regals took many shots on goal, but La Verne was able to put up a defensive wall in order to keep the Regals off the board.

However La Verne struggled to get ball possession throughout the first half.

Regals junior defender Trinity Martinez made some impressive progress offensively for Cal Lutheran, strategically maneuvering her way through the pack of Leopards.

The pressure was on for La Verne after junior forward Alexandra Fagerberg scored the first goal for Cal Lutheran 20 minutes in.

Many of the Leopards suffered from injuries, making it much harder for them to keep up.

The first half ended with Cal Lutheran up, 2-0, after a goal from Regal freshman midfielder Kylie Garcia.

Both teams came out much more aggressive in the second half. However as the intensity of the game increased, injuries on both sides started to pile up, resulting in substitutions as frequent as every five minutes.

La Verne freshman defender Jordyn Beaulieu gave the Leopards hope in the second, scoring the team’s first goal of the to cut Cal Lutheran’s lead to 2-1.

Sabrina Monfils, sophomore goal keeper, showcased her consistent great blocks, but the team’s energy began to die down as more injuries piled up.

La Verne struggled to create a consistent attack due to constant the substitutions every few minutes.

The Regals created a strong rhythm in their passing game and were able to seamlessly move the ball through the Leopard pack.

The attack worked out for them in the long run as they scored two back-to-back goals from junior forwards Cate Boller and Sam Cornejo, putting the score at 4-1 with 17 minutes left in the game.

The back-to-back scores also worked to put the game out of reach for Leopards.

La Verne stepped up defensively, but that was not enough as the Regals took the win with the final score set as 4-1.

Despite all of the injuries that were a key factor in La Verne’s game play, Beaulieu still has high hopes for her team.

“We worked hard even though we didn’t get the result that we wanted,” Beaulieu said, “People who don’t normally play are going to have to step up because of all the injuries though.”

The Leopards will face Chapman for senior night at 7 p.m. Saturday at Ortmayer Stadium.

Poets write off Leopards
Lack of training leads to death