After a disheartening 49-14 loss to the hands of Pomona-Pitzer last week, the La Verne Leopards bounced back with a much needed win over Southern California Intercollegiate Athletic Conference rival Whittier, 50-30.

La Verne started the contest with opening possession but were soon staring down a 4th-and-one on their own 40-yard-line.

Instead of sending the punting unit out, the Leopards elected to go for it, with senior running back James Gonsalves slamming it through the defense to pick up the first down.

Senior running back Martaveous Holliday established his dominance early in the game. After receiving a pass from senior quarterback Matthew Albright, Holliday juked his defender and after a key block from sophomore receiver Spencer Pool was able to run it in for the 52-yard touchdown.

“The blocking was incredible,” Holliday said. “Anytime I was out in the open field they were blocking everyone.”

The Leopards then dialed up a trick play on a seemingly inconspicuous extra point attempt.

Sophomore quarterback and holder on the play, Trevor McPherson, caught the defense off guard and completed his pass to sophomore defensive lineman Khary Sanders to put La Verne up 8-0.

“I really felt that we had a better chance of getting that first down and would have benefited more than if we punted,” said head coach Chris Krich. “The extra point play was something fun we put in for our guys, we were practicing it all week and we were excited to run it.”

After turnovers on both sides, the Poet offense began to ramp up, showcasing the size and talent of their wide outs, juniors Moises Gonzalez and Hakim Williams Jr.

Luckily for La Verne, the Leopard defense was able to hold the Poets to just a field goal.

Senior quarterback Sam Taylor burned the defense for 65 yards off of a read-option which then set the Leopards up in scoring position to end the quarter.

The Leopards picked up right where they left off from the previous quarter, with Taylor keeping it again for the score.

“It’s a momentum changer,” Taylor said. “When you hit it right off the bat and get the wheel turning at the beginning the difference is huge.”

Now up 15-3, the Leopard defense finally broke, letting Williams Jr. slip into the secondary for a wide-open 68-yard touchdown to even the score.

Junior running back Keishawn Robinson was able to move the ball well on La Verne’s next drive, setting up Holliday to waltz into the end zone for his second touchdown of the day.

Pumped-up from the big plays on offense the Leopard defense set a dominant tone, making multiple stops on fourth-down to give the offense the ball back.

The Poet offense ended the half 0-6 on fourth-down.

Coming into the second half, the Poet offense failed to get much going. Even after a fortunate tip saw Gonzalez come down with the ball for a big gain, the Poets were forced to punt after a big sack from senior defensive linemen Mikey Bloomfield.

After multiple offsides penalties on Whittier helped La Verne down the field, Holliday ran it in for his third score of the game.

Down 29-17 entering the final quarter, Poet sophomore quarterback Miguel Avina began to pick up the pace and efficiently moved the ball downfield, running it in himself to cap-off the drive and bring Whittier back within striking distance.

And with the score even closer at 36-30 after scores from both Gonsalves and Gonzalez respectively, both teams were poised to take the game.

Unfortunately for the Poets, Holliday needed to make one more highlight play. Holliday took the inside hand-off straight up the middle of the field, out-running nearly every defender and after another crucial block from Pool, completed his 49-yard trip to the end zone, putting the final nail in the coffin.

On their final drive, with a small chance of victory still remaining, the Poets looked for one of their star wide outs to make a play. However, senior strong safety Robert Franklin came down with the ball on a pass intended for Williams, ending any hope for Poet victory.

“I noticed they like to run across the middle of the field when we were in our cover-2 look, I saw their receiver starting to run his post but the quarterback wasn’t looking at him so I started to run away from that post,” Franklin said. “But I gotta hand it to the defense, he was panicked and he threw the ball and I came out on top.”

With his performance, Holliday solidifies himself as one of the top backs in the conference, finding the end zone four times and racking up 196 all-purpose yards in the process.

The Leopards play their next two games on the road, at Redlands at 7 p.m. Saturday, and at Occidental at 1 p.m. Nov. 2.

Leopards get played by the Lutes in football home opener 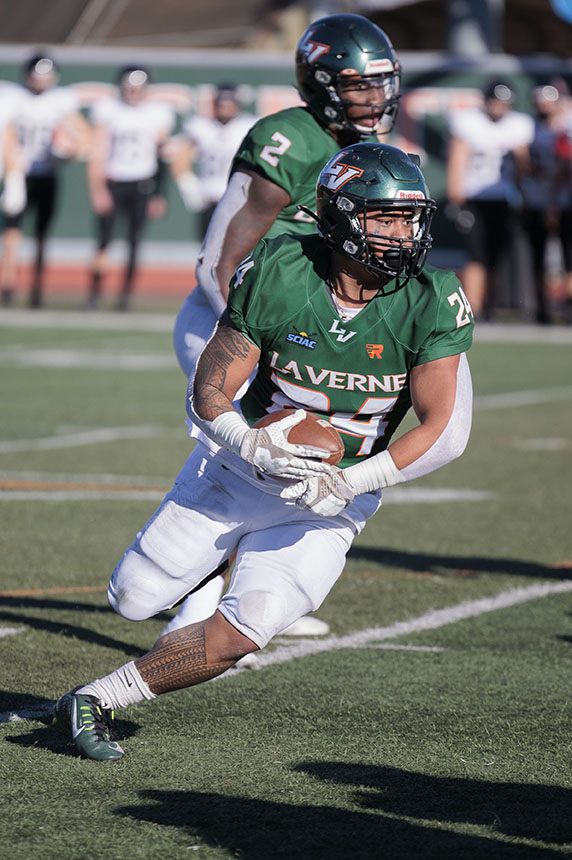 Leopards can’t get past Panthers in their final game 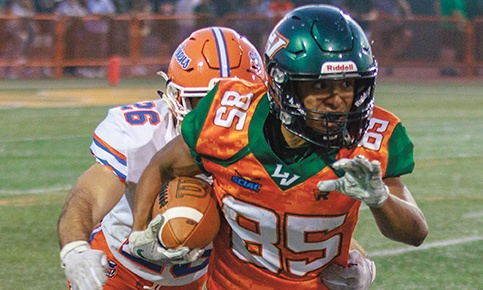